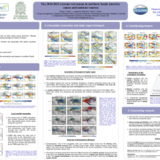 Paola
Arias
Universidad de Antioquia
Alejandro
Martinez
University of Arizona
Sara
Vieira
Universidad de Antioquia
Session III: Weather and climate extremes in the Americas
During 2010-2012, northern South America experienced one of the strongest wet seasons during the recent decades, with socio-economic implications of wide proportions. This period was characterized by two stronger-than-average La Niña events, one occurred in 2010-2011 and another less intense event in 2011-2012. This study focused on identifying the main moisture sources, besides the eastern Pacific, for the anomalous wet season occurred in this region during 2010-2012, and their association with the La Niña events observed in the equatorial Pacific. The results discussed here suggest that the main moisture sources to this anomalous wet season were the Pacific Ocean (via the westerly flow of the Choco jet) and the Caribbean Sea (via the weakening of the Caribbean low-level jet and the development of southward anomalies toward northern South America). Such changes appear to be associated not only to El Niño-Southern Oscillation (ENSO)-driven sea surface temperature anomalies in the eastern Pacific, Caribbean Sea, and north Atlantic, but also to ENSO-independent variability in the Atlantic Ocean. These results demonstrate the importance of interactions among eastern Pacific and Atlantic oceans to determine weather extremes and climate variability over northern South America.

Interesting!
When the case selection (conditional sampling) is for an extreme event, it is almost logically inevitable that the results show ALL the relevant factors are elevated. That is always what it takes to break a record.

That is true!
It is important to remark that, although in climatological terms the moisture contributions from the Atlantic are much larger than those from the Pacific, the 2010-2012 period exhibited considerably large contributions from Pacific ocean. This highligths the important role, not only of moisture transport, but also of local topography and the interaction between the colder and humid westerly winds of the Choco jet and the warmer and drier easterly trade winds to enhance convection over northwestern South America.

Hi Paola!
How are you doing? great to 'see you' here.
Interesting poster!. Good to know that it came up from the PASI course!.
I would like to comment that the year of 2010 was one of the most active years over the Atlantic Ocean in terms of tropical cyclones (TCs), which could have a relationship with the drought in some parts of South America (for instance Brazil), Marengo has some papers on this.
Hope to see you soon! cheers!

Great to talk to you again. Actually, 2010 was a very anomalous year in global circulation. Trenberth and Fasullo have a paper (2013) showing different circulation anomalies observed in Russia (strong heat waves), the Indian monsoon, and the Caribbean, all partially related to the strong La Niña observed in the Pacific. September and october 2010 are the third and second warmest months in the Caribbean, according to historical records. It seems huge amounts of latent heat were present in the region, inducing convergence in the equatorial region. This affected the local low-level jets (which explains the large rainfall in Colombia). Also, the warmer temperatures in the Caribbean could favor the formation of TCs in the region.

Hope to see you too!