Building the weather to climate bridge: The Caribbean Rain-Belt 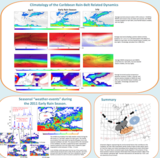 Teddy
Allen
International Research Institute for Climate and Society (IRI)
Session III: Weather and climate extremes in the Americas
An annual bimodal rainfall cycle with peaks during the late spring and late summer is observed throughout the IAS. A rainfall minimum occurs after the early rainfall season (ERS) and is known as the “mid-summer drought” (MSD). Despite the interest in the well-studied MSD, there is a lack of research describing the onset and variability of the ERS. Rainfall during the ERS is important for farmers as it moistens the soil after the dry season and can provide a catalyst for significant agricultural success.

Contrary to the acceptance of long term anecdotal evidence, heavy rainfall during the ERS is not simply the result of mid-latitude fronts. Instead, heavy rainfall during the ERS arises through a series of storms or “weather events” that result from the simultaneous occurrence of two primary ingredients over the region: upper tropospheric uplift dynamics and lower tropospheric tropical moisture advection steered by the “Panama Low”. A rainfall pattern emerges during the late spring in the western Caribbean, known as the Caribbean rain-belt, from the accumulated rainfall of each weather event during the ERS.

During some years the Caribbean rain-belt is weak or absent, however, it remains a climatological rainfall feature that is shaped by the consistency of late spring weather events. Sub-daily rainfall time series’ from the COCONet rain gauge network are used to construct the pattern of daily weather events that are then used to decompose the climatological Caribbean rain-belt.

Farmers depend on the succession of ERS weather events that shape the Caribbean rain-belt, but deadly flooding and landslides have also been recorded along the its path.

Hi Teddy,
I was curious what factors diminish during MSD in your schematic and do these factors that give rise to ERS also contribute to the late rainy season?

Vasu,
Thank you for taking the time to look at my poster! I am currently in the process of writing up the results that address your question. I take a very simple approach to examine early season rainfall by describing the time evolution of the basic building blocks for rainfall: uplift dynamics and moisture. I noticed that the MSD period can be thought of as the absence or reduction of uplift forcing and moisture relative to the climatological early rain season (15 May - 15 June).

I felt as if I was falling into a trap by examining the MSD as an independent phenomenon. To overcome this feeling, I used an analogy of a gardener turning on a tap to water plants. In this analogy, the gardener turns on the tap during the early rain season to water the plants. The actual turning of the tap represents the uplift dynamics and the water flowing out of the spigot is the atmospheric moisture. The plants can only get water if both the tap is twisted and if there is water in the pipes. The pipes can be full of water, but if the tap is not turned then the plants will remain relatively dry. Furthermore, the gardener waters the plants only about 3-5 times per season. Rainfall during the Caribbean early rain season occurs in events with a similar frequency of garden watering.

The MSD period arrives when the gardener turns the tap off for an extended period. There may be external reasons why the gardener stopped watering (i.e. mid-summer transients), but ultimately the gardener does not turn the tap. There is still some water in the plumbing during the mid-summer, but there is no twisting motion to turn the tap on. Thus, the MSD onset is best understood in context of the cessation of the early rain season.

I tried to identify possible forcings for uplift by placing the Caribbean in the geographic context of other well-studied subtropical convergence zones. Of particular interest was the Meiyu-Baiu in the western Pacific. I realized the commonality of these zones and borrowed ideas to build and test a conceptual model for the onset and decay of the early season rainfall and ultimately the Caribbean rain-belt.

Compared to April, I noticed that during the early rain season we observe low level southerly winds that advect moisture into the Caribbean from the tropics. The southerly winds are enhanced from zonal gradients that emerge from 850hPa cyclonic circulation near the Caribbean coast of Panama, known as the “Panama Low”. The frequency of occurrence of the Panama Low matches the frequency of occurrence of rainfall events during the early rain season. During the MSD, the Panama Low is no longer active and the low level zonal gradients diminish and zonal flow dominates the southern Caribbean and limits tropical moisture advection. Thus, the moisture source (+45mm TPW) diminishes during the MSD despite warming SSTs.

In addition, during the MSD period, upper tropospheric (200hPa) zonal wind weakens and at times becomes negative, thus putting the brakes on a westerly wave guide for transient waves and their related uplift dynamics in the Caribbean. Also, the anticyclonic circulation at 500hPa found in the Caribbean shifts northward during the MSD and limits mid-tropospheric positive temperature advection into the region. Therefore, the general circulation changes during the MSD and limits local uplift dynamics. And more interestingly, the general circulation that supports uplift during the early season actually tends to shift northward in the mid-summer (similar to Karnauskas et al. 2013). It is as if the gardener leaves the Caribbean during the hot mid-summer to vacation in North America and begins to water plants along the North Atlantic Convergence Zone.

I am not fully convinced that the late rain season is simply the result of the return of the uplift dynamics. First of all I would expect easterly waves and TS to play a bigger part in rainfall accumulation during the later summer. I doubt that the Panama Low works in the same fashion during the late summer as well. Also, I would expect the jet streaks during the late summer to be weaker than the late spring, thus limiting the ageostrophic uplift dynamics. However, these are all just initial working points that I have yet to test. My hope is to publish my work on the early rain season and then to commit the same vigor to understanding the late rain season.

Thanks again for your interest.
teddy

Nice work Teddy! Keep it up.

Hi Teddy,
Nice summary diagram! I think it's helping to understand about the convective processes on the region. So, Do you know how the summary diagram works for a different season, for example MAM or SON when prevailing zonal winds at low level?

Johanna,
Thanks for reading my poster!
Since each season has its own circulation regime, I am focusing on diagnosing specific seasons. Initially I started with the idea to pursue mid-summer diagnostics, but after a a series of farmer interviews (Jamaica, Dominica) I decided to shift my focus to the early rain season. The farmers indicated that rainfall variability during the early rain season was the most important season to impact their crops. In winter they expect dry and prepare for dry, same for July. However, in the early rain season, they expect wet, but major damage occurs if it is drier than normal.

So, I have focused my attention so far only during the early rain season as it was the most important for the agroclimate application. Next, I would like to diagnose the variability for the late season rain period, but only after I finish writing up my results from this poster.

My hypothesis is that in the presence of much lower precipitable water values in MAM, uplift dynamics would need to be much stronger to produce rainfall. Since this rarely happens during that time, only strong trough systems would produce rainfall. Also, since there is lower rainfall in MAM, I would think that the meridional winds from the tropics at both the lower and mid-troposphere would be lighter. Again, these are just simple and untested guesses based on my work so far. Ideally, I would like to contribute to a series of seasonal conceptual models to help explain rainfall variability throughout the year in the Caribbean.

If you like my poster, check out Sampe and Xie (2010). That was a large inspiration for me, but just in a different region.

Thanks again for your interest.
teddy

Hi Teddy!
How are you? hope you're doing well. I haven't seen you for a while!.
Interesting work!. I have one question, have you tested how the global climate models are simulating the Caribbean-Rain Belt, for example in 2011?

Christian, I think you're hiding from me!!!

As of yet I have not entered the dynamical model world. I know it is something that I should dedicate some time towards. Thanks for the gentle reminder. Hope to see you soon!