Can we predict seasonal changes in high impact weather in the US? 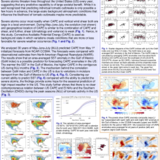 Eunsil
Jung
University of Miami
Ben
Kirtman
University of Miami
Session III: Weather and climate extremes in the Americas
The ability to predict severe weather has great societal value. It is well known that individual tornado outbreaks are predictable only several hours in advance. However, it may be possible to predict the seasonal changes in the environmental conditions that support tornado outbreaks. Essentially, we ask “can we predict changes in the likelihood of tornedo outbreak?” Here we use the NCAR Community Climate System Model version 4.0 (CCSM4) forecasts from the North American Multi-Model Ensemble (NMME), and observational estimates from North American Regional Reanalysis (NARR) for the period 1982-2011. This study shows that the Convective Available Potential Energy (CAPE), as the background state that is a more favorable condition for high impact weather in the United States, is strongly correlated with sea surface temperature in the Gulf of Mexico during the peak seasons of tornado outbreaks. In contrast, no contemporaneous relations are found with El Niño Southern Oscillation.

Given recent results from Allen et al (http://www.nature.com/ngeo/journal/v8/n4/full/ngeo2385.html), I'm curious whether you might use the same analysis and find any relationship between MJJ CAPE and *antecedent* winter ENSO conditions. Also, what do you think the best use is of this kind of prediction of enhanced/suppressed background conditions influencing the likelihood of severe weather over large regions for social resilience (in contrast to actual forecasts of severe weather on local scales)?

First question: Thanks for the suggestion. We did not examine the lag/lead relations between ENSO and MJJ CAPE yet
(According to Lee et al (2013) doi:http://dx.doi.org/10.1175/JCLI-D-12-00128.1), TransNino pattern is shown during the top 10 tornado active years (April-May), with no consistent El-Nino or La-Nina years (Table 3))

For the second question, it is a great question. We could encourage people to well-prepare for the tornado in the year of warmer SST in the Gulf of Mexico.

Very interesting work. Shows lot of promise. Figs. 1a and b show some relation between CAPE and tornado outbreaks. But do the anomalies also similar relationship i.e., CAPE anomalies relate to anomalies of number of tornadoes?

ENSO has significant influence on the Gulf of Mexico SSTs in spring and as your results show that US CAPE is related to Gulf of Mexico SSTs. It is intriguing that you dont find a relationship between US CAPE and ENSO. Do you have any insights on why this is the case?

I think, this is because the data period that we used (May-June-July). During this period, we did not find any linear relationships between US CAPE and ENSO as well as Nino 3.4 SST and Gulf of Mexico SST (not shown). FYI, we detrended SST in this study to remove the global warming effect.

I think, this is because the data period that we used (May-June-July). During this period, we did not find any linear relationships between US CAPE and ENSO as well as Nino 3.4 SST and Gulf of Mexico SST (not shown). FYI, we detrended SST in this study to remove the global warming effect.

Sorry this is a reply for the previous comment

Thanks for your suggestion. Yes. that's true. In this study we did not look at the relationship between the previous winter (DJF) and MJJ.

I also see a dipole pattern of CAPE between GoM and Caribbean Sea. Given that CAPE is very sensitive to SST, this is consistent with a typical remote ENSO influence on the tropical Atlantic. The remote influence on IAS SST peaks in MAM and dissipates quickly in MJJ. But, with a strong and persistent El Nino, the influence may persist throughout MJJ. Of course, Atlantic has its own internal variability, which may interfere with such relationship. In any case, it appears that linking GoM SST with US tornado activity is more effective in MJJ. Nice work! - Sang-Ki