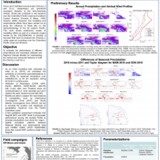 Johanna
Yepes
National University of Colombia
John F.
Mejía
Desert Research Institute
German
Poveda
National University of Colombia
Session I: Identifying opportunities and challenges of observing and modeling IAS variability and its teleconnections
We study the spatio-temporal distribution of the Choco and Caribbean Low Level Jets (ChocoLLJ and CLLJ, respectively). Both jets are prominent circulation features of the Intra-Americas and modulate the moisture transport and precipitation variability over western Colombia, the southern Caribbean Sea and the eastern tropical Pacific Ocean. The National University of Colombia, the Desert Research Institute, the Colombian Air Force and the Maritime General Directorate of Colombia joined in a project funded by the Colombian Administrative Department of Science, Technology and Innovation (COLCIENCIAS) to improve our understanding of ChocoLLJ based on new upper-air observations and atmospheric modeling experiments. The project will carry out two field campaigns of intensive observation (Sept 2015 and 2016) using two upper-air soundings systems at two key locations (one site over Colombian Pacific coast and the second one over a reconnaissance navy vessel). Four-dimensional data assimilation will help constrain the ChocoLLJ vertical and horizontal distribution, and will contribute to assess the ability of reanalysis and atmospheric models in reproducing the ChocoJet main observed characteristics. Additionally, we are conducting regional climate modeling simulations using the Weather and Research Forecasting model (WRF) and the Regional Climate Model systems (RegCM). We are using the models to downscale ERA-Interim to 50 km grid size and testing the sensitivity of the models to moist physics parameterization during the period 2010-2011, considered a La Niña episode and related to extreme wet anomalies over Colombia. Our preliminary results show that both models represent the main circulation patterns related to ITCZ, ChocoLLJ and CLLJ, but neither of them are capable of adequately simulate the locations and intensity of the wet patterns over Colombia. This work will show the highlights and challenges of our first field campaign and will present some preliminary results from the modeling efforts.

It seems intriguing that GPCP and TRMM match so well over Colombia but differs from the strong dry anomalies displayed by CRU, CMAP, and PERSIANN. Do you know what could be the cause for this difference?

I am surprised that CFS, JMA-55, MERRA are unable to capture the peak winds in 925hPa? Would this be a model resolution issue or data assimilation issue--that no reliable observed wind is getting in to the GTS? If it is the latter, then I gather reanalysis and weather and short term climate forecasts could benefit from improved rawinsonde/radiosonde coverage.

Dear Vasu,
First, I have to say that CMAP, GPCP, Persiann, CRU and TRMM have different spatial resolution but it seems it’s not the reason for the differences. I think, it’s not so clear that TRMM and GPCP match the wet anomalies over Colombia because they are around zero. In fact, I think the dry anomalies on CMAP and CRU are more coherent with El Niño event at the beginning of 2010. Anyway, the differences among datasets could be associated with the algorithm used by each one.

About the vertical wind profile, I think the reanalysis don’t capture the wind maxima for both reasons you mentioned. As a preliminary result is shocking but I know that we have to perform a sensitivity analysis to evaluate the changes on the vertical wind profiles due to changes on geographical area. On the other hand, the data assimilation system used by the reanalysis is different and it’s a big issue dealing with it. However, I trust a major radiosonde coverage would feed the models simulating better the reality, I think it’s a way to reduce degress of freedom in a very complex system.

You compare reanalyses products with sounding data. Does the vertical wind profile improve in the WRF simulations?

Dear Alejandro,
It’s very interesting question but I don’t have the answer yet. I hope the WRF simulations have better performance than reanalysis. For now, we’ve evaluated the performance of the models with precipitation and we found that the WRF simulations have better performance than RegCM, taking as the “ground truth” the TRMM dataset. We will continue working on improving model simulations, specially related to the vertical wind profile which is the way to evaluate the Choco Jet.

Hi Johanna,
I used the RegCM3 and RegCM4 to make some climate simulations from 1997-2007. I focused on summers because I was interested in detecting TC activity. I used several cumulus, boundary layer parameterizations and the two ocean flux schemes. I mention this because I was suprised to see you got the same ´problems´, it seems that RegCM produces too much convection on the borders between land and ocean. I'm not sure if the MIT parameterization could be the guilty but it seems, almost to me, MIT is producing too much convection over coastlines. Perhaps, the amount of release of latent heat is unrealistic; I mean, too much energy from ocean to atmosphere(speculation). For Mexico, RegCM simulated the years 1997-2007 to be very dry, but most of them were very rainy years, mainly 2005. I don't recommend to use this model to make seasonal forecast for Mexico and maybe for Colombia, what do you think? Could RegCM be used to make seasonal forecast in Colombia?

I don't think I have seen the CLLJ placed in context of the eastern Pacific. However, I am aware of gap winds within the region. So, I look forward to your vertical profile results from offshore of Colombia.

It is my understanding that a jet tries to restore thermal wind balance in response to horizontal thermal gradients. Do you think the ingredients for the CLLJ in the Caribbean are the same for the Pacific?

Dear Teddy,
It’s very interesting question. I think, it’s a combination of different causes. It’s shown that Choco low-level jet is related with the temperature gradients between Peru coast (cold) and Colombian Pacific coast (warm). Besides, there’s an important component of the cross-equatorial flow which recurves eastward after crossing the Ecuador and, as you mentioned, a topographic gap over western range in Pacific Colombian coast which produce a flow convergence nozzle-effect which increases the wind velocity.

Which TRMM product are you using? Radar (3A25), Passive Microwave (3A12), or Multi-Satellite (3B43)? While the differences between these products are not great, there are differences. But the model failure to show the LLJ is interesting.

Hi Ed,
We used TRMM 3B43, maybe It'd be interesting compare to other TRMM products.

Very nice work! What was the spin up time of your model simulations? I know RegCM now has the ability of using a "mixed" convective scheme (one for ocean and another one for land). Giorgi et al. (2012) used this approach over several CORDEX domains and found that it may be the most suitable option for regional climate simulations.

Hi Erick,
The spin up time in our simulations was around a month. It's true RegCM has the option to use a mixed convective scheme and we used it, but I think It doesn't work very well on our study region beacuse It seems to fail on northeastern coastline producing so much convection on there. I think MIT parameterization has better performance in RegCM simulations over this CORDEX domain during 2010-2011.

Do you have a hint on how topography could be influencing WRF and RegCM simulations? Thanks!

Hi Paola,
I think topography is highly dependent on resolution, specially the Pacific Colombian coast is not quite depicted by 50 km simulations, then the models resolve the equations on around 4 grid-cells missing many local processes and simulating coarsely the convective processes due to topographic effect. We hope to simulate at 25 and maybe 12.5 km, so we expect suitable simulations on our study region.