The contribution of tropical cyclones to seasonal precipitation over Mexico 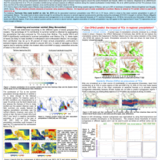 Christian
Dominguez
Instituto de Geografía, UNAM
Victor
Magaña
Instituto de Geografía, UNAM
Session III: Weather and climate extremes in the Americas
Tropical cyclones (TCs) are key contributors to seasonal precipitation but are seldom considered in seasonal climate forecasts. Along with easterly waves (EWs), they produce or induce up to 50% of summer rainfall over Mexico, Central America and the Caribbean Region. This effect is clear in semiarid regions that are affected by TCs, as northwestern and northeastern Mexico. Even during droughts, a TC may result in enough precipitation to recover dam levels and reduce the magnitude of hydrological droughts. Although, seasonal forecast information is used in the water management and infrastructure planning process, the meager predictability to estimate TCs tracks on seasonal time scales makes them only a source of uncertainty. Statistical and dynamical approaches to predict seasonal TC activity, based mainly on the ENSO phases, have not shown to be good enough to forecast regions of TC activity. The present study aimed at exploring ways of determining preferred TC tracks and the chances of having above normal seasonal precipitation by the impact of a single phenomenon. During the 1979-2009 period, preferred TC tracks were determined and related to probabilities of landfalling TCs according to ENSO phases. The mean flow, diabatic heating, sea surface temperature and atmospheric stability were considered as key factors to regionalize TC activity. Therefore, the role of large scale forcing and ensembles of seasonal forecasts should be taken into account for quantifying TC effects at regional scales in order to improve seasonal forecast of precipitation over Tropical Americas.

How did you account for TC rainfall in Fig. 1 and Easterly wave rainfall in Fig. 5? Differentiating rain from a TC and outside environment can become complicated especially as they make landfall or skirt the coast.

Hi Vasu Misra,
Thank you for your interest in my poster!, great question, by the way. I created a filter which follows each TC track during the whole lifetime reported by NHC (I used the official HURDAT database) in a box of 5º, since that the rainfall produced by a TC is defined to be in a radius of 2.5º from the center according to Englehart and Douglas (2001).
For Easterly Waves (EWs), it was a litte bit more complicated. There is no official database of EW tracks, so that I used the ERA-Interim wind at three levels (600, 700 & 850 mb) to create one composite of wind (suggested by Serra et al. 2010) which served to detect EWs, the same filter used for TC rainfall was applied to get the rainfall produced by EWs but using a different box. In this case was a box of 15ºx15º, a radius of 7.5º from the center of the EW track.

Nice poster! Did you notice any mid-summer minimum in TCs or tropical waves? Does the contribution of TCs to rainfall change during the May to November season?

Hi Scott,
Thank you for your comment and questions!. I would like to answer your questions as it follows:
1. Did you notice any mid-summer minimum in TCs or tropical waves?
This question is really interesting. Only two clusters over the Eastern North Pacific (ENP) have a mid-summer minimum. In figure 1, The ENP-B and ENP-D clusters have it both during July and August, when the Caribbean Low Level Jet has its maximum strength over the Caribbean-Mexican ENP and it decreases the Easterly Wave (EW) activity over ENP (which is minimum in those months).

2. Does the contribution of TCs to rainfall change during the May to November season?
Great question! I also wondered it a couple of years ago. It is thought that some months have more precipitable water than others but the rainfall produced by TCs is more than that, TCs are an interaction between ocean and atmosphere, so that the rainfall produced by them depends on the evolution of its wind field, regional geographical elements such as topography, their track(lifetime), as well as their size, relative humidity and synoptic patterns(which can provide moisture).

Hi Christian,
Nice poster.
Have you done some analysis with your clusters about El Nino and La Nina?

Hi Eduardo,
Yes, I have. I analyzed 30 years of TC activity. Over the Gulf of Mexico and Caribbean region, the TC activity is not just modulated by ENSO but also the kind of track. In other words, one of the most important results I found is the highly variability of straightforward tracks, whose tropical cyclogenesis is located on the Caribbean region, because during the warm phase of ENSO, this kind of track is not present. Over the ENP, the story is quite different because I found just one kind of track can be modulated by ENSO (cluster ENP-B in figure 1). It seems, perhaps, that the cyclogenesis of ENP-B could be related to the CLLJ strength because it could produce more EWs over the cyclogenesis region of cluster ENP-B (it's my speculation)