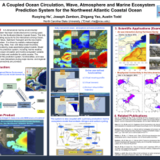 Thanks much for your comments. Our coupled regional modeling system is nested inside global models. We have been using global GFS, HYCOM, WWIII to provide realistic open boundary conditions for our regional atmosphere, ocean and wave models, respectively. So the large-scale climate variations are being accounted for to the degree by which these global models are capable of producing.

I agree with you that we need to play close attention to air-sea-wave coupling in studying IAS marine environment, extreme events and their long-term variability. We look forward to working with others in the community to advance the state of the art of coupled modeling in addressing IAS climate variability and prediction problems.

Ruoying,
This is very encouraging to see WRF being developed as an regional Earth system model. But I was wondering if you have run this model for a long period of time and examined the simulated climate. Also when you run this for short-term forecasts, are you using any specialized initial conditions or are you interpolating it to your regional grid from the large-scale conditions.

Thanks Vasu, we have been running the coupled modeling system over the synoptic and seasonal time scales, but haven't tried to run it further longer. Having said that, long-term coupled simulation has always been one of our plans, but it would require a significant amount of computing power that we are yet to secure.

Regarding your question about the initial conditions, we obtain them from global models (GFS, HYCOM, WWIII). Each short-term coupled forecast begins with a week or so hindcast to allow the coupled system to dynamically digest initial conditions and spin up.