On the dynamics of the Caribbean Low Level Jet 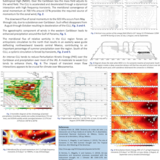 Eduardo
Herrera
Universidad Nacional Autónoma de México
Victor
Magaña
IG, UNAM
Ernesto
Caetano
IG, UNAM
Session II: Ocean-Land-Atmosphere interactions of the Continental Americas and the Caribbean
The Caribbean Low Level Jet (CLLJ) is a key element of the Mesoamerica Climate. Its intensification during July produces a westward displacement of the Inter-Tropical Convergence Zone (ITCZ) over the eastern Pacific that results in the Mid-Summer Drought (MSD). This acceleration is not produced by a strengthening of the North Atlantic Subtropical High (NASH). Over the Caribbean Sea the mass field adjusts to the wind field. The CLLJ is accelerated and decelerated through a dynamical interaction with high frequency transients. The meridional convergence of zonal momentum at 700 hPa around 15°N provides the required source of momentum for the zonal wind. The downward flux of zonal momentum to the 925 hPa occurs from May through July, due to subsidence over Caribbean. Such effect disappears from August through October resulting in deceleration of the CLLJ. The ageostrophic component of winds in the western Caribbean leads to enhanced precipitation around the Gulf of Panama. The meridional flux of relative vorticity in the CLLJ region forces an anticyclonic circulation to the north that results in an easterly wave guide deflecting northwestward towards central Mexico, contributing to an important percentage of summer precipitation over the region. South of the CLLJ, a cyclonic circulation is forced by transients. An intense CLLJ tends to reduce Perturbation Kinetic Energy (PKE) over the Caribbean and precipitation over most of the IAS. A moderate to weak CLLJ tends to enhance them. The impact of transient mean flow interactions appears to be crucial for climate over Mesoamerica.

Interesting idea, eddy-mean flow interaction!
Fig. 2 shows a momentum flux divergence (acceleration) of (3 m2/s2) / (1000km) = -0.3 m/s per day. That is a significant acceleration on seasonal time scales, if realized locally. Unfortunately it sounds tricky to be able to close a momentum budget to that accuracy: The fv term is similarly large for v ~ 0.1m/s, while the -d/dx(Phi) term is similarly large for a ~1m height gradient across the Carribean's 30 degree width. Fluids are so slippery and tricky to diagnose. Good luck with the challenging but work!

Oops, challenging but fascinating, I meant to say!

That's right, this is a fascinating challenge.
In the case for zonal acceleration from May to June and from June to July the terms -d/dx(Phi) and fv are not enough to explain those accelerations. Then we assume that is necessary other terms like -d/dy(u'v') to explain the acceleration.

Are you saying you used reanalysis to estimate fv and -d/dx(Phi) to the necessary precision, 0.1 m/s in v and 1m across Caribbean in geopotential height? From our experience, momentum budgets are very very far from closed in a local basis. So I would suggest being careful to infer that your hypothesis of the dominance of eddy flux convergence, local in both longitude and pressure, is strongly supported by such a budget.

We used reanalysis to see the magnitude orders of the zonal momentum equation members including transients. We know that reach momentum budgets is not easy.
We try to approach to problem since other sources, like the extended Eliassen-Palm vector, the divergence-convergence of the E-vector allows to estimate the importance of meridional transport of zonal momentum into the mean flow.

This is a very nice study. To add to this discussion, I would agree with Brian that you need to be cautious in using reanalyses for momentum budgets. In examining the barotropic growth of synoptic eddies in the eastern Pacific, we arrived at opposite conclusions depending on if we used NCEP RA1 (Serra et al. 2008, no significant barotropic growth) or ERA Interim (Serra et al. 2010, growth on the order of the EAP to EKE term). The ERA Interim seemed to be in better agreement with a 25-km regional model run over the region (forced with ERA Interim at the boundaries though).

It is mentioned that CLLJ modulates TC activity through changes in vertical shear. But given this eddy-mean flow interaction you are alluding to, I wonder if a strong CLLJ with easterly waves riding over it fosters or diminishes tropical cyclogenesis?

The interaction between CLLJ and easterly waves results in diminishing the cyclogenesis on the Caribbean region mainly in June and July. The acceleration of jet drives in high vertical wind shear.

I believe the jet also results in strong moisture divergence over the Caribbean at this time.

I also am interested in studying the MSD. What data did you use to get the plots in your poster?

Figures 1 and 3 are discussed extensively in the reference number 3.

Figure 4 was presented in AGU Meeting of the Americas (2013) and I did made it.

Thank you so much, Eduardo.

It is interesting to see that the summer intensification of the CLLJ is not caused by a strengthening of NASH but by the meridional convergence of zonal momentum. However, several studies suggest a westward shift of this anticyclone during the past 2-3 decades (e.g., Li et al., 2011). Do you think that such a shift could influence the position/intensity of the CLLJ?

Explain the CLLJ by the NASH with a kind of geostrophic balance is not the solution because the acceleration only presents in the Caribbean region.
We think in a geostrophic adjustment in wich the mass field adjusts to the wind field, that would explain the westward shift of NASH.

Hi Eduardo,
Nice poster!. I am just curious to know if you found any relationship between El Niño and the strength & duration of the CLLJ.
Have you taken a look of the data of this year?. It's a strong El Niño and the Eastern North Pacific (ENP) has been very active in terms of tropical cyclones (TCs).
By the way, other question comes up: according to your findings, if the CLLJ has been very intense, could you associate more EWs over ENP and so, more TCs over this basin but near the Mexican coastline? What do you think of?

Hi Christian,
Thanks!.
Yes I found it. For El Niño an La Niña years, I found when El Niño is on then CLLJ is strongest than normal otherwise with La Niña condition CLLJ is weak.
I have not done an analysis for this year.
I have not work with TCs around the Mexican coastline, let me think about it and I'll give an answer more extense.

Could you comment on how heating over South America fits with your eddy-mean flow interactions driving the CLLJ?

Great heating over South America creates a super low in the region, this drives in more intense flux.
Like I wrote previously I found when El Niño is on then CLLJ is strongest than normal otherwise with La Niña condition CLLJ is weak.
About how heating is related with eddy-mean flow interaction, I have not the answer yet.

Most of the coupled models (or all) have difficulty in simulating the semiannual cycle of CLLJ. Did you have chance to explore this work in coupled models? If so, do you have any insights based on your work on why that would be the case?

Unfortunately I have not simulated the cycle of CLLJ yet.