MJO, NAO, ENSO, and Mid-Summer Rainfall in the Caribbean 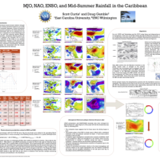 Scott
Curtis
East Carolina University
Doug
Gamble
UNC-Wilmington
Session II: Ocean-Land-Atmosphere interactions of the Continental Americas and the Caribbean
Several recent studies have explored climate teleconnections to patterns of wind, sea surface temperature, and precipitation in the Intra-Americas seas region. While results have been mixed, we have found that mid-summer precipitation (July) around the island of Jamaica is strongly related to the state of the North Atlantic Oscillation (NAO) during the preceding spring (March) and the concurrent evolution of the El Niño/Southern Oscillation (ENSO). Specifically, a positive NAO and emerging El Nino combine to enhance the mid-summer dry spell in this part of the Caribbean, explaining about 50% of the variance in GPCP rainfall, and the two climate oscillations appear to be linked to wintertime MJO activity in the western Pacific. The NAO is modified by the MJO first through alterations in the upper-air stream function, while the El Niño is slower to develop, depending on oceanic wave mechanisms. In this poster, we will describe these relationships with composites of NCEP reanalysis data and drawing from previous literature.

Nice work. It is quite interesting that you are able to relate large-scale phenomenon like NAO over a small region like western Jamaica. But I guess the widespread surface anticyclonic streamfunction anomalies has a much broader impact including over Central America. Any thoughts on this?

Thanks for the comment! Yes there is a wider impact (a field of NAO-rainfall correlations was produced) but the center of action is located near western Jamaica. This can be inferred from the largest values of anticyclonic streamfunction anomalies (Fig. 6c) and subsidence anomalies (Fig. 7b). It is also interesting to note that the Martin and Schumacher figure also links MJO strongly to precipitation in the same general location. This poster hypothesizes on the linkages between the MJO and rainfall via an NAO bridge (primarily).

Thank you for showing your research results. I am more interested in the relationship of the MJO with rainfall. Unlike ENSO and NAO, the MJO is an intraseasonal phenomenon. Can explain to me how the MJO affect the rainfall in the Caribbean?

Thank you for your comments and question. The Martin and Schumacher (2011) study relates the MJO in phases 3 and 4 to a drying of Jamaica and points westward. They attribute the drying to an enhanced CLLJ. This is likely intraseasonal. Another potential forcing mechanism may be through the upper atmosphere as the MJO excites a wave train in the 300 hPa streamfunction (Frederiksen and Lin 2013). The resulting pattern is NAO-like, with negative streamfunction anomalies being entrenched in the western Caribbean. This leads to subsidence and suppression of convection. In short, my analysis supports an MJO-MSD relationship via the NAO. As is well known, an intraseasonal variation, if strong and properly aligned in time and space can trigger longer-term climate variations.

Very interesting paper Scott showing coincident ENSO/NAO events in MSD. The 2015 MSD appears to have been stronger than most past events in the Western Caribbean, any thoughts on the possible roles of an intensified Saharan dust season in contributing to an enhanced MSD 2015?

Thanks for the comment. I am sure the Saharan dust season could also play a role! However, as seen in Table 2 of my poster, the NAO and ENSO are both in the correct sense to produce a severe MSD in 2015 - very similar to 1997.

This is some interesting work (and discussion) and something that I have been thinking about for some time. In our MJO-Caribbean paper we found strong evidence of the MJO modulating the CLLJ. However, we did not take the next step to establish how the jet was being influenced. Your work certainly suggests that the MJO - CLLJ (and consequently rainfall) connection could be via the NAO (see Cassou 2008 also). It seems we just need to take the next step in the analysis to prove this connection and how it may contribute to longer-term droughts 7 pluvials.

I'm glad you were able to view/comment on my poster. You've done some great work and opened my eyes to the MJO piece (I had noted the NAO relationship for some time - it is quite robust). I agree there may be a NAO-CLLJ connection via the NASH, and that as a scientific community we need to take that next step.

My question is, how do you think the 30-45 day period of the MJO affects rainfall during the early rain season?

As always, I look forward to your comments and insights.
arghh matey,
teddy

(others readers may disregard the Pirate references...)

As you know, your Masters thesis got me interested in the NAO-Caribbean rainfall connection and I was curious as to the triggering mechanism. Much of the discussion is based on the atmospheric patterns I observed in the months between March and July and relating it to the literature.

I think the MJO will affect the early rainy season if it is timed right and there were some good talks on this subject during the conference (I also mention a paper in my poster). I also think you are on to something with the orientation of the CLLJ. It would be good to perform a water budget of the western Caribbean to explore this further. Maybe COCONET can be used to help with this?

Hi Scott,
Great work! I would like to know how was July in this year in terms of rain in Jamaica? was it very dry? can you explain the dynamical effects of ENSO over Jamaica, please?

Sorry for the late reply. Because our NSF project is ending we had to pull our mesonet before July 2015. Also the GPCP v2.2 data has not been computed yet. If you give me your email, I can follow up with the GPCP July data when it becomes available.

I can tell you from news reports and personal experience that is was dry in July 2015, but maybe not as bad as July 2014.

Hi Scott,
Sorry my late reply too. Thank you so much for your answer!. It sounds interesting, I though that July 2015 was drier than July 2014 because of El Niño.