Potential Impact of Climate Change on the Intra-Americas Sea: A Dynamic Downscaling of the CMIP5 Model Projections 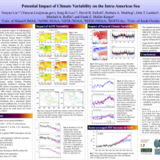 Yanyun
Liu
University of Miami/CIMAS and NOAA/AOML
Sang-Ki
Lee
University of Miami/CIMAS and NOAA/AOML
David
Enfield
University of Miami/CIMAS
Barbara
Muhling
University of Miami/CIMAS and NOAA/SEFSC
Session I: Identifying opportunities and challenges of observing and modeling IAS variability and its teleconnections
This study examines the potential impact of anthropogenic greenhouse warming on the Intra-Americas Sea (IAS, Caribbean Sea and Gulf of Mexico) by downscaling the Coupled Model Intercomparison Project phase-5 (CMIP5) model simulations under historical and two future emission scenarios using an eddy-resolving resolution regional ocean model. The simulated volume transport by the western boundary current system in the IAS, including the Caribbean Current, Yucatan Current and Loop Current (LC), is reduced by 20-25% during the 21st century, consistent with a similar rate of reduction in the Atlantic Meridional Overturning Circulation (AMOC). The effect of the LC in the present climate is to warm the Gulf of Mexico (GoM). Therefore, the reduced LC and the associated weakening of the warm transient LC eddies have a cooling impact in the GoM, particularly during boreal spring in the northern deep basin, in agreement with an earlier dynamic downscaling study. In contrast to the reduced warming in the northern deep GoM, the downscaled model predicts an intense warming in the shallow (≤ 200 m) northeastern shelf of the GoM especially during boreal summer since there is no effective mechanism to dissipate the increased surface heating. Potential implications of the regionally distinctive warming trend pattern in the GoM on the marine ecosystems and hurricane intensifications during landfall are discussed. This study also explores the effects of 20th century warming and climate variability in the IAS using regional ocean model forced with observed surface flux fields. The main modes of sea surface temperature variability in the IAS are linked to the Atlantic Multidecadal Oscillation and a meridional dipole pattern between the GoM and Caribbean Sea. It is also shown that variability of the IAS western boundary current system in the 20th century is largely driven by wind stress curl in the Sverdrup interior and the AMOC.

I am aware of this study as I have referenced it in some of my recent studies. You mention that you use temperature and salinity from global models to force MOM4p1 at lateral boundaries. Don't you use ocean currents as well? and what is the interval of this forcing at the lateral boundaries?

I am also curious to know why Fig. 7 is showing warming trend despite cooling trend in GoM in Fig. 1 in AMJ? Is it because the warming trend in summer and fall months dominate? If this is a seasonality to the trends in this region, then it seems to be contrary to the seasonality in the global mean temperature trends?

Thanks for your attention and interest! In our simulation, the lateral regional boundaries (for temperature and salinity) are damped to the ensemble weighted CMIP5 T/S values. We didn’t specify the ocean current at the boundaries. MOM4 assumes zero advection on the boundary and no gradient beyond the boundary for velocity. T/S in the sponge zones are monthly.


About the figures, we understand there is some confusion here. The pattern in Fig.1 actually shows there is reduced warming in northern GoM during AMJ instead of cooling, so it is consistent with Fig. 7. We also performed a heat budget analysis in our earlier work (Liu et al. 2012) and showed that the reduced LC is mainly responsible for the reduced warming in the northern GoM during AMJ. For the seasonality to the trend, you did propose an interesting topic here. We will study the role of different season for the warming trend in our future work.

To what extent do you think changes in lower tropospheric circulation in the future will impact the SST in the southern Caribbean? Or do you think most changes are AMOC related?

Also, do you think it is possible that increased SST in the future would diminish the role of the LC towards heating the Gulf of Mexico? Put another way, if it becomes warm enough then the LC would not be needed to warm the Gulf. Thus, the elimination of the LC in the Gulf may not necessarily represent a cooling. The absence may instead just represent the lack of heating demand. What are your thoughts towards this?
thank you

Hi Teddy,
Thank you for your comments and questions!
1) I think the intense warming near the southern Caribbean is linked to the relaxation of the thermocline slope across the Caribbean Current (CC), and is linked to the reduced CC. You pose an interesting question here. We haven’t checked the future changes in lower tropospheric circulation. The radiation should be important for SST variability. It would be interesting to explore how the wind and lower tropospheric circulation will affect the SST in the future.
2) I think the reduced LC will have a cooling impact for the northern GoM. In our earlier work (Liu et al., 2012), we performed a heat budget analysis to show that the reduced LC is mainly responsible for the reduced warming in the northern GoM. The LC transport has a warming influence to the GoM whereas the net surface flux has a cooling influence and offsets the warming effect by the LC. The combined effect of anomalous surface flux and advective heat flux convergence (ΔQADV ) results in the warming of GoM. As shown in Table 2 (Liu et al., 2012), the ΔQADV increases much less in high-resolution simulations (EXP_HR, 3.9 TW) than that in coarse-resolution climate models (EXP_LR, 7.3 TW) due to the LC reduction. We explored the contributing terms (i.e., ΔQδT, ΔQV and ΔQδTV) for the anomalous advective heat convergence (Equation 2, Liu et al., 2012). The volume transport related term ΔQV, is negative if the LC is reduced. Therefore, the reduced LC results in anomalous advective heat flux divergence in the GoM and thus cools the GoM basin. The temperature difference changes related term, ΔQδT, is positive dominates the other term. The positive value of ΔQδT indicates the water that enters from the Caribbean Sea warms more than the water that exits through the Florida Straits. The cooling associated with the reduced LC (ΔQV) is large and thus plays an important role in EXP_HR, whereas ΔQV in EXP_LR is much smaller, explaining why the GoM is warmed more in EXP_LR than in EXP_HR. In other words, the cooling associated with the reduced LC (ΔQV) is underestimated in EXP_LR because the LC reduction during the 21st century is only 1.6 Sv in EXP_LR, whereas it is 4.7 Sv in EXP_HR.
Thank you for you interest!
Yanyun

First, great poster! Second, I am interested in your result regarding the expectation that hurricane RI during landfall will increase due to the increased SSTs. While the theory at the surface supports that, did you happen to look at any upper level atmospheric warming in your model? Studies suggest that upper level warming may cancel out the effects due to surface warming. At least on intensification. The most intense hurricanes typically have a very impressive thermal and pressure gradient from the surface aloft. If that gradient is lessened due to ubiquitous warming, we might not see an increase in RI formation. Any thoughts on this? Thanks!

Hello Jill,thank you for your question and comments! That's an interesting perspective! We haven't explored the upper level atmospheric warming in your model. Our simulations are basically CMIP5 surface-forced simulations. We can check it in our future work. Thank you for your suggestion!

I appreciate your insightful comment. I agree that under the AGW the atmosphere should warm faster than the surface water in the IAS. This should stabilize the atmosphere aloft to decrease tropical storm activity overall. Here is one paper among many others on that issue:

According to Yanyun's simulation result, the upper ocean temperature increases extremely fast over the the Northern Gulf of Mexico in summer. So, we think that TCs that make landfall across the Texas-Louisiana shelf may get an extra boost due to the extremely high SST. Of course, a fully coupled downscaling simulation is required to further address this point.

In your results, you attribute the natural climate variability in the IAS to AMO (first mode) and IAS dipole (second mode). Have you looked at the regression of global SSTs on PC of second mode? My understanding is that the second mode is part of a large-scale SST pattern: related to North Atlantic tripole in the North Atlantic and ENSO-like pattern in the Pacific.

Thank you for your interest and comments! Yes, I agree with with you. The second IAS dipole mode is is a part of the well-known North Atlantic tripole mode.