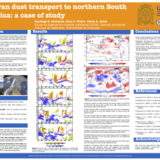 Santiago
Giraldo Cárdenas
Escuela Ambiental. Universidad de Antioquia
Sara C.
Vieira
Escuela Ambiental. Universidad de Antioquia
Paola A.
Arias
Escuela Ambiental. Universidad de Antioquia
Session II: Ocean-Land-Atmosphere interactions of the Continental Americas and the Caribbean
The past June 27, 2014, large concentrations of atmospheric particulate matter (PM) were detected over central Colombia. Local environmental authorities linked this anomalous phenomenon with the passage of an African Easterly Wave (AEW) across the northern South American landmass. Although AEWs are thought to play an important role not only on the generation but also on the transport of mineral aerosols from the Saharan Desert, this transport and deposition is more evident over the Caribbean region rather than over the northern Andes, as occurred during this particular event, being the first to be reported in Colombia. By combining National Center for Environmental Prediction and National Center for Atmospheric Research (NCEP-NCAR), in-situ air quality measurements, and satellite observations, this work aims to track the particular AEW and the associated transport of Saharan mineral aerosols across the Atlantic Ocean to central Colombia. We identify the meteorological conditions prevalent over the region throughout this event and diagnose the possible reasons for the anomalous PM deposition. Particularly, we analyse the background atmospheric conditions imposed by the probability of occurrence of El Niño developed over the Pacific Ocean during this event and its possible relation with the anomalous passage of an AEW over the northern Andes. This study provides an evidence of a possible influence of the AEWs on aerosols transport from the Sahara to northern South America and suggests a possible influence of El Niño conditions over the trajectories of the AEW.

It is well-known that dust can be transported to the Caribbean or northern South America from Africa. Did you look at how the transported dust affects oceanic and atmospheric variables in these regions (the detailed processes)?

Thanks for your comments and interest in our work.

Although dust transport from Africa to the Caribbean and northern South America is a well known feature of climate variability over the region, this particular event caught our attention since this is the first official report showing large amounts of Saharan dust desposited in central Colombia. Furthermore, the trajectory of this particular transport was located further south than it normaly does during boreal summer. For example, Yu et al. (2015) pointed out that dust transport from Africa to South America (including the Amazon and most of Colombian and Venezuelan territory) is negligible during boreal summer (because the ITCZ is located to the north of this region), but this particular event occurred on late-June. Prospero et al. (2014) suggest similar conclusions.

Addressing your question about the atmospheric and oceanic circulation during this particular event, we identified that the dust trajectory was characterized by the non-occurrence of precipitation (Fig.2). This could favor the transport of large dust concentrations to central Colombia, where the mineral dust was finally deposited. Additionally, meteorological conditions over central Colombia by the time of dust arrival (June 27) were characterized by a very stable atmosphere, consistent with the high temperatures and low air humidity associated to the development of El Niño-like conditions during boreal summer 2014 (Fig. 3). However, local rain gauges in Medellín indicate the ocurrence of rainfall during the night after the dust deposition (June 28). Moreover, the development of El Niño-like conditions by late-June 2014 would favor the southward displacement of this particular dust trajectory. We are currently addressing the possible mechanisms that allowed the deposition of such large dust amounts in a region where this has not been the rule, and the evolution of atmospheric and oceanic variabiles during this event.

The CALIPSO product toward the end of June did show dust over the region although the track was not over your site (it was close). I would suspect that sonde measurements would show a nice dry layer (the Saharan Air Layer - SAL- described by Carlson and Prospero in the 1970s. Normally you would not expect much rain during a strong SAL event because of the sharp inversion. But given your location, and the complex topography, I would suspect that convection events could break up the inversion which could produce rain (and wash out the dust). Have you actually collected rain in this or related studies?

Thank you for your interest. During the days surrounding the event we had a dry regime, nonetheless we had precipitation at small hours of June 28, just after the event was evidence in the city (all day long on June 27).