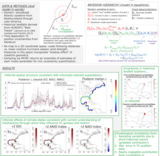 Susan
Tolwinski-Ward
AIR Worldwide
Session III: Weather and climate extremes in the Americas
A spatially-resolved climatology for the annual frequency of tropical cyclone (TC) landfalls along the Atlantic coast of North America is developed, and its uncertainty deriving from multiple sources is quantified. Historical landfall counts in piecewise-linear segments approximating the coastline are modeled using Poisson regression with spatial random effects. Predictors include index representations of the mean hurricane-season phases of the Southern Oscillation, the Atlantic Multidecadal Oscillation, and the North Atlantic Oscillation, with the effect of the latter also modeled spatially. This spatial generalized linear model for landfall frequency is used in conjunction with a data level accounting explicitly for the time-dependent uncertainty in the recorded landfall positions. The model performs skillfully in cross validation exercises. The inferred effects of the climatic predictors are also consistent with current scientific understanding of the mechanisms through which related large-scale climatic variability affects the development and motion of Atlantic tropical cyclones. Sampling variability in the data over the short length of the observational record and observational error in the historical data are found to contribute substantially to the overall climatological uncertainty. The contribution from uncertainty in the underlying model parameters is negligible compared to these other sources. The model presented here could be used for applications in insurance and risk management, and adaptations could also be used to investigate changes in TC landfall climatology under an uncertain and changing climate.

Hi Susan,
Nice poster. One question came to me when I saw your poster. In the part of your results: 'inferred effects of climate states consistent with current understanding of mechanisms through which they influence TC genesis and motion', could you explain which dynamics during +2 NAO Index trigger TC formation, please?

Hi Christian, thanks for my first question now that the workshop is over! ;)

The climatology I developed is a climatology of landfalls along the Atlantic coast of the Americas, not of formation. The NAO influences landfall locations through its effect on the location of the Bermuda/Azores High and hence on the steering flows advecting TCs toward the coast (see eg. Elsner et al. (2000), Spatial variations in major U.S. hurricane activity: Statistics and a physical mechanism, or Elsner (2003), Tracking hurricanes (doi:10.1175/BAMS-84-3-353.), or Knowles and Leitner (2007), Visual representations of the spatial relationship between Bermuda high strengths and hurricane tracks, Cartogr. Persp.,(doi:10.14714/CP56.316), and there has also been some interesting paleotempestological research about this same effect on much longer time scales, by Liu and colleagues if I'm remembering correctly).

Actually one of the results that came out of my study that I hadn't seen documented elsewhere, and that I thought was most interesting, was that my analysis shows a band of latitudes get blocked during positive NAOI (blue in my figure), but above and below that band of latitudes see slight increases in the probability of landfall (red). Most other studies looked just at the US and so hadn't noticed before the increase in landfall to the south.

Yes, this is a nice result.

Hi Susan,
Sorry for my late reply, a lot of things to do. I wish I had made my question before the workshop ended.
Thank you for your great explanation!. I have read all the papers you mentioned, some of them are "a jewel for me". Perhaps in near future, you can use this information to determine which regions in USA could receive more precipitation produced by TCs and improve the regional seasonal outlooks. Keep up the good work!

Susan, this is a very creative approach to understanding landfall probability and reducing uncertainty. I want to make sure I understand your conclusions. It seems that you find the orientation of the coastline to be the most important predictor and not the climate state part of the model. Is this correct? Could you summarize your conclusions? Thanks!

Hi Yolande, I remember you from my days at UofA. You're in Washington now? Hope you're great!

Thanks for your question. The main (though unadvertised) result is actually a catastrophe risk model: from the fitted statistical model, one can simulate climate-state dependent landfall activity at a fine spatial resolution that is consistent with the historical record. In terms of uncertainty quantification, most of the uncertainty (at such a fine spatial resolution) comes just from the short length of the historical record, especially south of the US border. Spatial patterns of landfall variability were also sensitive to the choice of averaging window for the NAOI predictor. The coastline geography certainly influences the shape of the probability distribution across shape, but not the uncertainty.