Influences of the MJO on ENSO

Dynamics and stochastic forcing of ENSO

El Niño – Southern Oscillation (ENSO) is driven by large-scale air-sea coupling in the Pacific region (Neelin et al 1998). When the coupled system is in an unstable dynamic regime, ENSO is sustained by coupled instability, such as described by the paradigms of “delayed oscillator” (e.g., McCreary 1983; Battisti 1988; Suarez and Schopf 1988) and “energy discharge-recharge” (Wyrtki 1985; Jin 1997). When the coupled system is in a neutral or stable dynamic regime, ENSO is sustained by stochastic forcing, defined as high-frequency variability incoherent with ENSO variability (e.g., Chang et al 1996; Penland 1996). It is possible that the coupled system migrates between stable and unstable dynamic regimes on decadal or longer timescales.

Many atmospheric weather phenomena act as stochastic forcing to ENSO.  The most effective one is strong episodes of surface westerly wind, often referred to as westerly wind bursts (WWB) or westerly wind events (WWE) (Harrison and Vecchi 1997).  These WWE influence ENSO by reducing the equatorial zonal gradient in sea surface temperature (SST) through: (i) cooling the western Pacific warm pool due to enhanced surface evaporation, (ii) expanding the warm pool eastward due to induced current in the oceanic mixed layer, and  (iii) warming the equatorial eastern Pacific due to induced oceanic Kelvin waves, which deepen the thermocline and reduce upwelling cooling (Kessler et al. 1995) (Fig.  1)

Role of the MJO

The strongest, long-lasting and eastward moving equatorial WWE are mostly associated with the MJO.  These are all characteristics of WWE needed to efficiently generate oceanic Kelvin waves (Hendon et al. 1998). In addition, WWE associated with the MJO exhibit a basin-scale structure and they undergo strong interannual variability, both essential to ENSO responses.

Many observations have shown anomalously strong MJO activities prior to and during the onset of ENSO warm events (Fig. 1). Seasonal mean MJO activity tends to lead ENSO SST by 6 – 12 months (Zhang and Gottschalck 2002). Their strongest lag correlation occurs between the MJO in boreal spring and ENSO SST in winter. Theories have predicted that the most optimal spatial structure of stochastic forcing of ENSO is similar to that of the MJO (Moore and Kleeman 1999). Numerical simulations have demonstrated that, when models are stable, realistic ENSO variability can be generated by stochastic forcing derived from observations (Fig. 2). The MJO is subject to modulation by ENSO. Stochastic forcing on ENSO is therefore a two-way interaction between the MJO and ENSO. 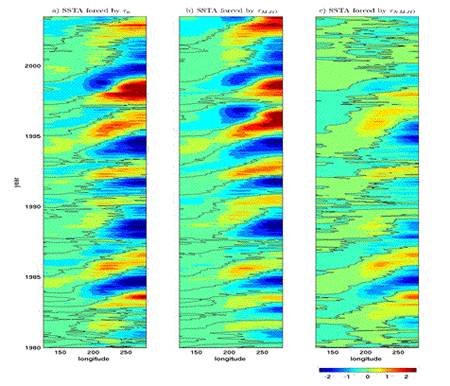 The extent to which ENSO can be satisfactorily predicted with or without the MJO is the ultimate test of the role of the MJO in ENSO. Predictions of the last major ENSO warm event in 1997-98 were mostly disappointing (Landsea and Knaff 2000). None of current ENSO prediction models, dynamic as well as statistical, includes the MJO. Individual MJO events are unpredictable beyond 20 days (Waliser et al. 2003). It is a challenge, therefore, to improve ENSO prediction (better estimates of ENSO evolution and prediction uncertainties) by incorporating our knowledge of the MJO seasonal and interannual statistics into ENSO prediction models while developing models that can reproduce MJO-ENSO interaction.