In boreal summer, the MJO has considerable interaction with the circulation and varability of Asian summer monsoon. In this season, intraseasonal disturbances associated with the MJO tend to propagate in a northeast direction and strongly influence the “active” and “break” monsoon rainfall cycles over the South and East Asian continent ( Yasunari 1979; Annamalai and Slingo 2001), including the genesis of synoptic systems (Goswami et al. 2003). Therefore, understanding, modeling, and predicting the MJO have direct bearing on numerous socio-economic issues of the World's most populous countries (Wang 2006), including factors such as agriculture, water and power management, disaster prevention, air quality, etc.

Since the early work of Yasunari (1979), our knowledge about the MJO's influence on the boreal summer monsoon has been enhanced many fold due to the availability of satellite data. The active and break spells associated with the MJO's influence on the monsoon can be delineated, even without filtering, in the raw time series of precipitation (left panel of Fig. 1). These intraseasonal variations in rainfall largely result from the direct impacts of large-scale north/northeastward-propagating rainfall disturbances. On average, three-to-four northward-propagating events can be identified in any given year (right panel of Fig. 1). 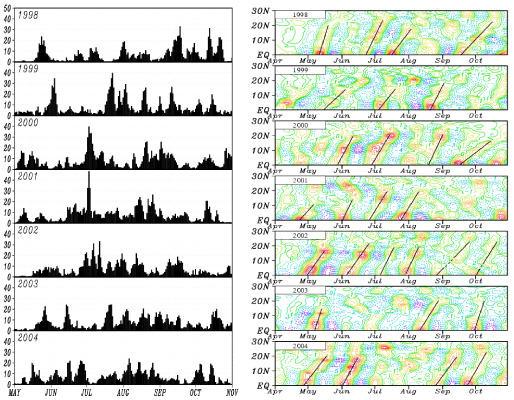 In contrast to the winter MJO, the MJO's influence on boreal-summer rainfall variability is largest in the off-equatorial region (e.g., Bay of Bengal, South China Sea, and Western North Pacific in upper panel of Fig. 2), where the maximum summer mean rainfall occurs. In addition to the 30-60-day mode more commonly associated with the MJO, the Asian summer monsoon also exhibits significant quasi-bi-weekly (~10-25 day) variations (lower panel of Fig. 2). 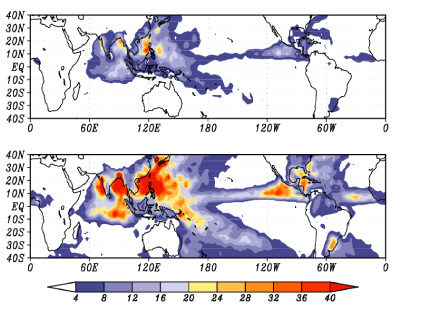 Modeling and predicting the MJO are hampered by its complex propagations (Fig. 3, taken from Wang et al. 2006). Briefly, the lifecycle of the MJO in boreal summer can be divided into four stages: (1) initiation of precipitation anomalies over the western-central equatorial Indian Ocean, eastward migration and amplification over eastern Indian Ocean; (2) formation of a slanted band of rainfall anomalies, tilted from India to the maritime continent; (3) northeastward migration of the rainband in the northern Indian and western north Pacific Oceans, and (4) continuous moving to the inland of Asian continent and rapid spread along the ITCZ to the Eastern North Pacific (ENP). The rainfall anomaly in the southern Bay of Bengal exhibits a marked east-west seesaw with that in the ENP (Wang et al. 2006). In general, the anomalous MJO-driven convection in the southern Bay of Bengal leads convection in the ENP by about 16 days. By taking advantage of this intraseasonal teleconnection, the predictability of the MJO in the ENP can be enhanced.

In addition, the boreal summer impact of the MJO directly modulates the rainfall over Asian continent through its influence on the genesis of monsoon lows and depressions - the principal rainfall-bearing synoptic systems of Asian summer monsoon. Figure 4 taken from Goswami et al. (2003) shows that a vast majority of such systems develop during the wet phase of the MJO. 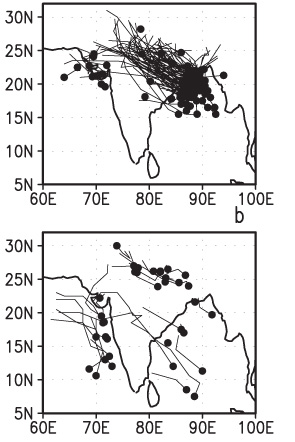 The recurrent nature of the MJO's influence on the boreal summer monsoon, with a period of 30-60 day (Fig. 1), together with a large spatial scale of precipitation variability (Fig. 3), offers an unique opportunity to forecast the monsoon low-frequency variability that is beyond the deterministic limit of weather prediction (e.g., Krishnamurti et al. 1990; Waliser et al. 2003). Due to its capability in modulating the genesis of monsoon synoptic systems (Fig. 4), predicting the MJO has paramount implication on extreme events such as severe floods and droughts over South and East Asia. Though most state-of-the-art global climate models still have a variety of problems in reasonably simulating the MJO, some coupled models are able to capture many aspects of the MJO (Sperber and Annamalai 2007; Kim et al. 2007), while some have demonstrative skill in forecasting it (Fu et al. 2007; Woolnough et al. 2007).

As illustrated in Figs.1-2, the wide spectral range of the intraseasonal variability associated with the MJO and the event-by-event variations in propagation speeds pose a great challenge for the real-time MJO forecasting. In the next couple of years, we expect the planned Indian Ocean array and newly available satellite data (e.g., AIRS, CloudSat) will improve the model initialization and physical representations key to the real-time dynamical MJO forecasts. In addition, since the MJO is embedded with meso-scale convective complexes, the successful development of cloud-resolving high-resolution models and/or downscaling schemes (both statistical and dynamical models) may be needed to make the dynamical MJO predictions useful for regional management purposes.