The MJO and African Rainfall

To what extent does the MJO affect rainfall over Africa?

An assessment of the African rainfall response to the MJO needs to account for the spatially and temporally variable behaviour of the MJO signal. Using a detection method of intermittent atmospheric oscillations (Local Mode Analysis, Goulet and Duvel 2000), an MJO-like signal, with an average period around 40-45 days, can be found over Africa in most seasons. Over 30% of the intra-seasonal rainfall variance is explained by this signal in parts of Central Africa and in Southern Africa (south of 15 °S) during northern and southern hemisphere summer, respectively. The eastward propagating component of the signal is best shown along the Inter-Tropical Convergence during the March-May season, as displayed by the clockwise rotation of the vectors from west to east in Fig.1a. Over the Equatorial Atlantic and parts of Eastern Africa, more than 40% of the rainfall variance is explained by these local modes of intra-seasonal convective variability (Fig. 1b).

Figure 1. MJO-related rainfall variability over Africa in March-May. (a) Average rainfall propagating modes for 1979-2001. Vector lengths are proportional to the local amplitude of the rainfall fluctuation, and their direction denotes the phase at which the maximum fluctuation occurs. An eastward propagation of convective anomalies is for example depicted by an increase of the phase with time, i.e. by a clockwise rotation of the vectors, towards the east. W and E show the location of the rainfall indices over Kenya as used in Fig.2, for the Western and Eastern regions, respectively.
(b) Percentage of the overall intra-seasonal rainfall variance explained by the MJO events.

East Africa stands among the regions where the MJO signal is best defined. However, topography and its interaction with atmospheric circulation contribute to modify regionally the phasing of the rainfall response to the MJO. For instance, contrasted signals are found between Western and Eastern Kenya, the regions shown on Fig.1a as blue and red boxes, respectively. In the West (Fig.2, top), a significant rainfall increase is found during MJO phases 1 to 4, when the MJO convection peaks over the Indian Ocean. It is associated with deep convection over the East African highlands, the instability being fuelled by anomalous low-level westerlies and moisture advection from the Congo Basin (Fig.2, bottom). In the East, enhanced rainfall is found earlier (phases 7-8, when MJO convection is suppressed over the Indian Ocean). The deep convective signal is absent, replaced by shallow convection in conjunction with the low-level easterly anomalies characteristic of this MJO phase (Fig.2, middle). These examples point to the fact that the MJO impact on rainfall may either be direct or indirect, via regional modulations of the large-scale circulation signal. 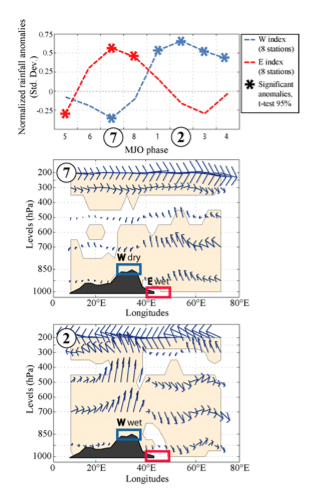 Top: Composite rainfall anomalies for different MJO phases during the March-May rainy season in two regions of Kenya / Northern Tanzania (blue : Western region ; red : Eastern region, as located in Fig.1 and on the lower panels). The phases are defined according to Wheeler and Hendon (2004), with each phase lasting for an average of ~ 6 days [Roughly phases 2-4 (6-8) have convection enhanced (suppressed) over the Indian Ocean]. The rainfall anomalies are obtained after extraction of the mean annual cycle.

Middle and bottom: Composite wind anomalies (zonal and vertical) for the MJO phases 7 and 2, along an equatorial cross-section between the Congo Basin and the Western Indian Ocean. Shading indicates anomalies statistically significant at the 95% level.

The identification of a MJO signal over Africa may contribute, in the regions where its impact on rainfall is strongest, to the prediction of intra-seasonal characteristics of the rainy season (major dry/wet spells, onset and cessation). For instance, the phasing of the rains in Eastern Africa with respect to the MJO can be exploited for intra-seasonal rainfall prediction, with a time lead of at least 5 to 10 days.

The assessment of the potential and limitations of the MJO for rainfall prediction in Africa requires an appraisal of other intra-seasonal forcings, as well as better understanding of the modulations by the intraseaosnal time scale on (extreme) weather variations in the region.   It also requires analysing the effect of the interannually varying background climate conditions, especially sea-surface temperatures, on the MJO behaviour and related rainfall anomalies.