The MJO and Assessment of Global Benefits and Hazards

by Jon Gottschalck and Wayne Higgins

How can improved understanding and more realistic simulations of the MJO lead to better forecasts of benefits and hazards in the global tropics?

The MJO has documented relationships with numerous phenomena, including the ENSO cycle, the monsoon systems in both hemispheres, and tropical cyclone activity in all of the ocean basins. Moreover, the MJO can aid in the development of mid-latitude extreme precipitation events and produces distinct periods of anomalous precipitation over near equatorial regions of South America, Central America, Africa, and the Maritime Continent. The relationships noted above often result in short-term (week 1-3) weather hazards and/or benefits that can have far reaching socioeconomic impacts.

In order to exploit improved understanding of the MJO and its associated impacts in the short-term, the Climate Prediction Center (CPC) has developed an experimental global tropics Benefits/Hazards Assessment and Outlook. The product is issued weekly and currently includes (i) outlooks for above and below normal precipitation, (ii) areas with favorable and unfavorable conditions for tropical cyclogenesis, and (iii) areas with impacts from existing tropical cyclones.  The product links many on-going activities in CPC, both operational and developmental, and includes strong participation from several other NOAA centers including the Earth System Resources Laboratory (ESRL), the National Hurricane Center (NHC), the Hydrometeorological Prediction Center (HPC), and the National Weather Service (NWS) western and central regions. CPC ensures that the  Outlooks are consistent with other regional CPC assessments (such as the US Hazards Assessment) and tropical cyclone information from the National Hurricane Center (NHC) and the Joint Typhoon Warning Center (JTWC).

Figure 1: Example benefits/hazards map from December 19, 2005 indicating forecasted areas of above normal (green) and below normal (yellow) rainfall and favorable conditions for tropical cyclogenesis (red). The assessment product is GIS based and allows the overlay of additional geographic information – in this example, rivers and major population centers.

The physical basis for the Outlooks includes atmospheric responses to the ENSO cycle, the MJO, and other coherent and/or persistent modes of variability in both the tropics (atmospheric Kelvin waves, equatorial Rossby waves, etc.) and extratropics (low-latitude frontal systems, mid-latitude blocking, etc.). Several tools are used to develop the weekly product, including regular detailed atmospheric and oceanic monitoring data, statistical MJO forecasts, dynamical forecasts from both the Global Forecast System (GFS) and the Climate Forecast System (CFS), ENSO and MJO composites, and a global synoptic-dynamic model of subseasonal variability.  Figure 2 gives an example of a statistical MJO forecast that is used regularly by the hazards / benefits team. 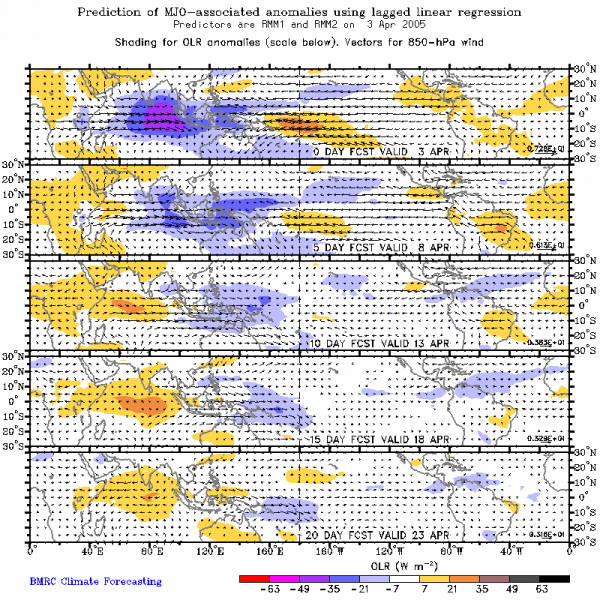 The experimental product bridges the gap between climate and weather and has many diverse applications in various sectors of the economy (including the financial, energy, agriculture, water resource management and fire weather sectors).  The Outlooks also provide emergency managers and regional planners with a heads-up on potential hazards related to climate, weather and hydrologic events in the global tropics.  Preliminary verification of the Outlooks for both precipitation (Figure 3) and tropical cyclogenesis (Figure 4) are encouraging, with skill levels comparable to those achieved with other CPC operational products. 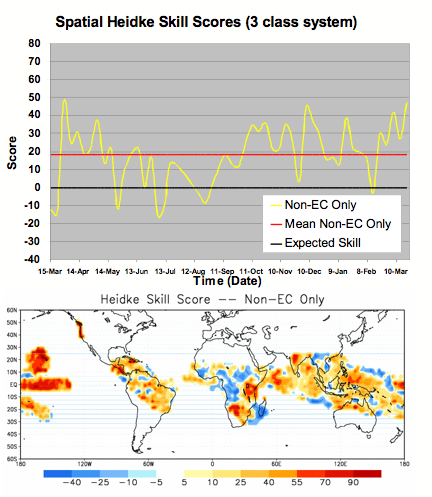 Figure 3. Verification of forecasted (non-EC) above/below rainfall areas from March 2005 through March 2006 for a three class system (A, N, B; EC is equal chances for A, N or B). (a) Weekly time series of Heidke skill score for all areas and (b) Heidke skill score for each grid point over the verification period. The Heidke skill score is a measure of how well a forecast did relative to a randomly selected forecast and a score of 0 indicates that the forecast did no better than what would be expected by chance. A score of 100 depicts a "perfect" forecast and a score of -50 depicts the "worst possible" forecast.

Improved understanding and more realistic simulations of the MJO (including onset and demise) will have tremendous implications for assessing future potential benefits and hazards across not only the global tropics but also (at times) in the extratropics. Furthermore, quantification of potential predictability and achievable skill levels using multi-model approaches can lead to probabilistic forecasts of potential hazards. CPC’s future plans include the continued expansion of collaboration (both weekly monitoring/assessment and research) and the development of additional MJO forecasting tools. 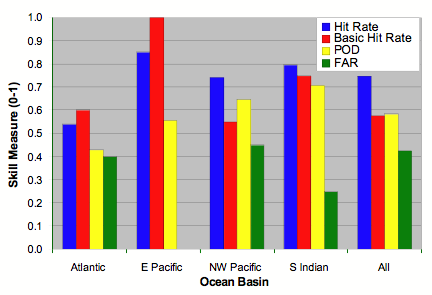