The MJO has been shown to have important influences on various weather and climate phenomena at many time scales, such as the diurnal cycle of tropical deep convection, Asian and Australian monsoon onsets and breaks, El Niño-Southern Oscillation, tropical hurricanes, and extreme precipitation events. However, the impact of the MJO on atmospheric composition, such as ozone (O3), has yet to be well documented. 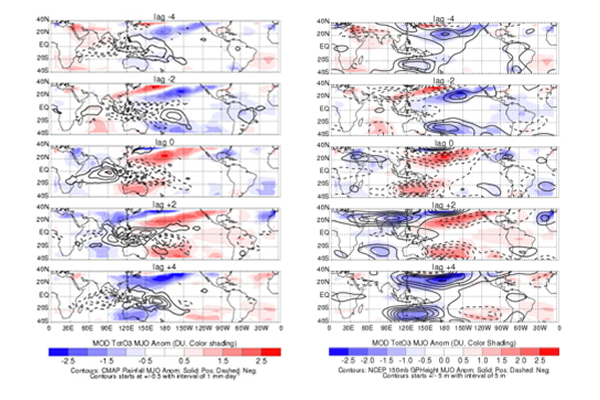 This study has implications for the stratosphere-troposphere exchange regarding the role of tropical deep convection and its associated dynamics. Moreover, its findings may be useful to developing and assessing climate and chemistry/transport models.

We will analyze the vertical O3 distribution in the upper troposphere and lower stratosphere using O3 data from modern satellite sensors and in-situ ozonesondes to more robustly characterize the MJO-ozone relationships and to quantify the nature and processes that contribute to both the seemingly more understandable subtropical total O3 anomalies and the weaker and/or more complex near-equatorial total O3 anomalies, particularly regarding dynamical versus chemical processes and stratospheric versus tropospheric contributions.