The MJO and the Australian Monsoon

Could MJO Predictions help for forecasting the Australian monsoon?

The MJO is typically at its strongest and most coherent during the southern hemisphere summer. During this season, the MJO displays greatest variability of low-level winds and convection across the eastern Indian Ocean and western Pacific between the equator and about 15°S (e.g., Fig.1). This region encompasses the Australian and related Indonesian summer monsoons. Thus great potential for MJO-induced variability of these monsoon systems exists. 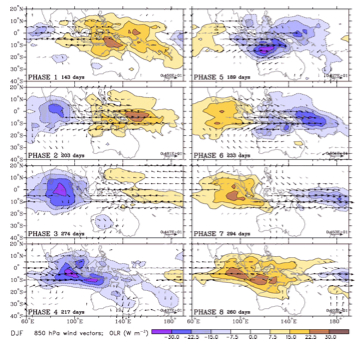 Figure1. Composite OLR and 850-hPa wind anomalies for eight phases of the MJO during December/January/February (DJF). The phases are defined according to the analysis of Wheeler and Hendon (2004), with each phase lasting for an average of 6 days during an MJO cycle. OLR contour interval is 7.5 W m-2, with the colour scale as shown. Black vectors indicate wind anomalies that are statistically significant at the 90% level, with the magnitude of the largest vector shown on the bottom-right of each panel.

The climatological peak of the Australian monsoon occurs in January and February, while monsoon onset typically occurs around mid to late December. Considerable intraseasonal variability of the monsoon rainfall and circulation occurs with each monsoon season being composed of a number of “bursts” and “breaks”, each lasting from a few days to a week or more. A greater portion of this variability can be ascribed to the MJO than to any other intraseasonal mode. During years of strong MJO variability, a large-scale envelope of convection sweeps eastward across the region every 30-90 days, together with changes in low-level winds from easterly to westerly (Fig.1). The precipitation variation associated with a typical MJO event has amplitude of up to 6 mm/day in the far northern coastal region (Fig.2, Phases 5 and 6 versus Phase 2), which is comparable to the standard deviation of weekly rainfall.

Figure 2. As in Fig.1, except for composites of rainfall and wind over Australia. The precipitation contour interval is 1 mm/day, with additional contours drawn at +-0.5 mm/day. Only those rainfall anomalies that are statistically significant at the 90% level are shaded. Sourced from http://www.bom.gov.au/bmrc/clfor/cfstaff/matw/maproom/RMM/index.htm. 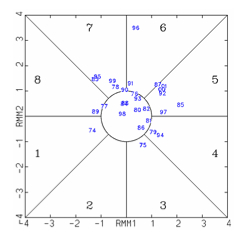 Figure 3. Darwin onset dates (as defined by Drosdowsky, 1996) in the MJO phase space of Wheeler and Hendon (2004). The numbers 1 through 8 (large and black) have the same meaning as the Phases of Figs. 1 and 2. RMM1 and RMM2 are the projection coefficients of the leading pair of empirical orthogonal functions of near-equatorial convection and winds, as are used to define the MJO phases. A blue number is plotted for each monsoon onset, being the year of the nearest December. For example, at the onset of the 1996/97 monsoon, the MJO was in Phase 6 (near the top of figure).

The robust impact of the MJO on the Australian monsoon, together with demonstrated predictability of the MJO at lead times approaching ~3 weeks, implies the possibility of useful monsoon predictions (e.g., onset date or periods of above normal and below normal rainfall accumulation) at these lead times.

In the short-term, extended range prediction of the large-scale dynamical fields associated with the MJO needs to be translated into predictions of parameters of direct relevance to agriculture and hydrology. In the long-term, improvements in the representation of the MJO in dynamical forecast models should allow for prediction of the full range of MJO-related monsoon variability.