The MJO and Extratropical Weather

Even though the MJO is most evident in the global tropics, it is also connected to substantial variations of mid- and high-latitude atmospheric circulation (see Figure). There is considerable evidence that deep tropical atmospheric convection impacts atmospheric flow in the extratropics. Because the MJO is characterized by strong variations in tropical atmospheric convection, it is possible that it influences extratropical weather phenomena - in a manner analogous to the influences of the El Niño on North American weather. Thus, 10-20 days forecasts of weather away from the tropics may benefit from the assessment and prediction of the MJO in the tropics. 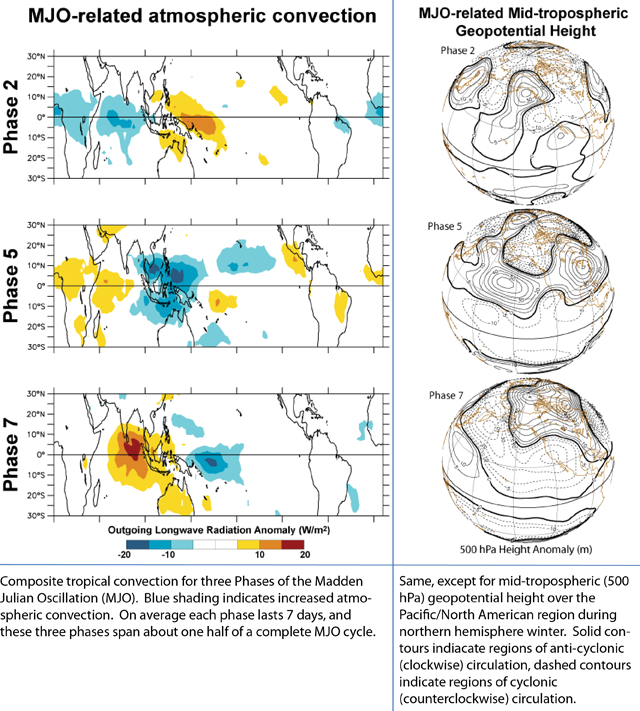 The extratropical atmospheric circulation anomalies associated with the MJO, extend the influence of this tropical phenomenon to weather conditions over the Globe. Various relationships between observed weather variations over continents and the MJO have been found in recent years.

Over mid-latitudes, it has been shown that extreme wintertime precipitation events along the west coast of the U.S.A. have been shown to occur preferentially during certain phases of the MJO. Also, intraseasonal variations in precipitation along the west coast of the USA have been found to connect to the MJO (see center panels below). The rainfall variations over the west coast of the USA appear related to the MJO atmospheric circulation anomalies. The period of increased rainfall over the Northwest occurs when the MJO-related anomalies result in anomalous flow from the Pacific Ocean onto the continent. Meanwhile, periods of reduced rainfall are associated with anomalous atmospheric circulation from the continent to the ocean (see figure below).

More recently, connections between near-polar variations in both hemispheres. The MJO appears to impact the Arctic Oscillation (AO) and the Southern Annular Mode (SAM), as well as continental wintertime air temperatures across the Arctic (see right panels below). The temperature variations in the Arctic appear related to the advection of moisture and temperature by the atmospheric circulation anomalies. For example, the cold temperatures in central Canada Phase 2 below are associated with southward movement of cold, dry polar air, driven by a ridge to the west and a trough to the east.

Because of the potential predictability of the MJO between 10-20 days in advance, its influence on mid- and high-latitude weather could be exploited from improvements in weather forecasts on these timescales.

The mechanisms responsible for the statistical connections between intraseasonal tropical variabiility and extra-tropical weather bear further investigation. It is also of interest to understand the ability of dynamical models to represent these connections, and thus to exploit the potential predictability from the MJO. Dynamical analyses of the connections between the MJO and extratropical atmospheric variability are necessary to understand the nature of these connections. Further, the robustness of the statistical relations between the MJO and extra-tropical variability should be understood.