The MJO and Hurricanes

The MJO produces a strong modulation of tropical cyclone activity in many regions of the tropics, including the Atlantic Ocean, Gulf of Mexico, and east Pacific Ocean.  The MJO is associated with variations in sea surface temperature, organized precipitation, low-level winds, vertical wind shear, and atmospheric humidity and temperature, important factors in tropical cyclone formation and maintenance.  Forecasts of the MJO at 2-3 week lead times might aid in forecasting periods of enhanced tropical cyclone formation. 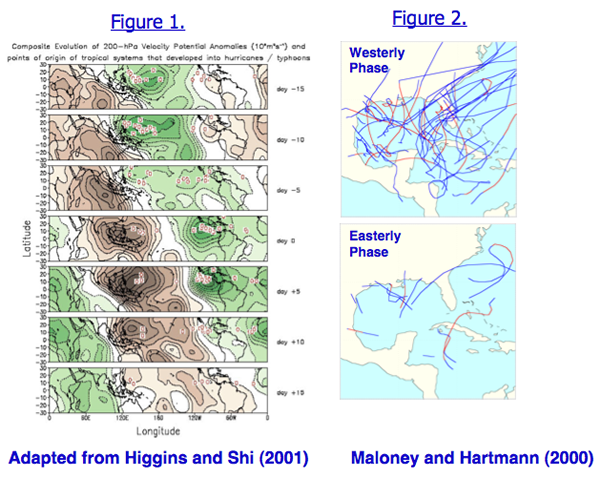 Given the evidence that the MJO is predictable with 2-3 week lead-times, periods of enhanced or suppressed hurricane activity may be predicted at similar lead times. Such knowledge would have implications for public safety, energy production, recreation/tourism, among other interests.

Two avenues of further investigation include: 1) understanding how the MJO modulates hurricane activity, and 2) determining whether 2-3 week predictions of the MJO can be used to predict periods of enhanced tropical cyclone activity.