Western boundary currents—like the Agulhas Current in the Indian Ocean—carry heat poleward, moderating Earth’s climate and fuelling mid-latitude storm-tracks. Ongoing changes in their strength and transport could exacerbate or mitigate future climate change. These currents are warming more rapidly than the rest of the global ocean and recent studies, reliant on climate models, have suggested that they are intensifying and shifting poleward in response to a strengthening and expansion of the global wind system. 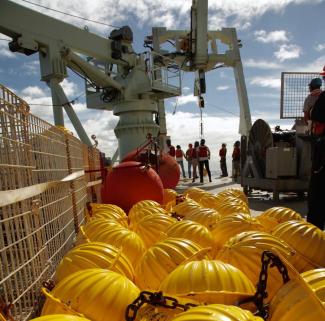 On deck of the RV Knorr during the ACT experiment in April 2010.

Using three years of new ocean measurements from a moored array of current meters, together with 22 years of sea surface height data from satellite altimeter, Beal and Elipot have estimated changes in the strength of the Agulhas Current since the early 1990s in a new paper in Nature. They find that its transport has not increased, despite expectations based on rapidly warming sea surface temperatures. Instead, its flow has broadened due to more meanders and eddies, with similar trends suggested in the Kuroshio and East Australia Current. These results suggest that intensifying winds may cause an increase in the turbulence of western boundary currents, rather than their mean flow as linear theory predicts, analogous to the eddy compensation theory in the Antarctic Circumpolar Current.

Increased eddying and meandering of the Agulhas Current could act to decrease poleward heat transport, while increasing coastal upwelling and the exchange of pollutants and larvae across the current from the coast to the open ocean.