The Gulf Stream transports warm salty water from the subtropical region to mid-latitudes in the North Atlantic, and changes in its path can have a strong impact on regional marine ecosystems and fisheries. Understanding the variability of the Gulf Stream path at decadal and longer timescales is crucial for predicting future physical and biogeochemical variations in this region. 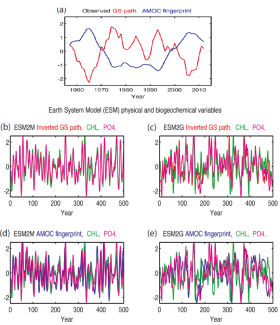 The results illustrate how changes in the large-scale ocean circulation, such as AMOC, are teleconnected with regional decadal physical and biogeochemical variations near the east coast of North America. Further, AMOC-induced decadal variability in chlorophyll and nutrient concentrations in the Gulf Stream region might be important for changes in the localized carbon cycle and fisheries at decadal timescales.

A. Sanchez-Franks1 and R. Zhang2