In summer 2019, the northeast Pacific Ocean experienced a resurgence of extremely warm upper ocean temperatures (>2.5˚C warmer than normal), in a pattern that strongly resembled the 2014-2016 warm “Blob” which devastated regional ecosystems and strongly impacted coastal communities. As a result of its strength and persistence, this 2019 Blob 2.0 generated similar widespread concern among fishery and wildlife managers for sensitive marine ecosystems along the west coast of North America. Analyses of the upper ocean temperature budget in this region showed that the Blob 2.0 primarily arose as the result of a record thin ocean mixed layer depth (MLD) (Figure 1a), a quantity which determines how much energy is needed to warm the upper ocean. This is similar to boiling a pot of water: the less water there is in the pot (i.e., the thinner the MLD), the less energy and time it requires to bring the water to boil. 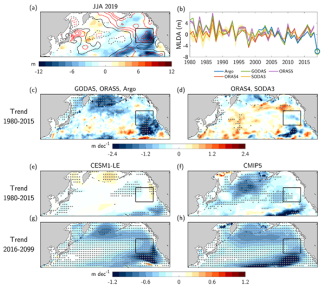 A new study by Amaya and co-authors in the Special “Explaining Extremes of 2019 from a Climate Perspective” Issue of the Bulletin of the American Meteorological Society now reveals that the record thin MLD that drove the Blob 2.0 was exacerbated by a multi-decadal shoaling of the mean MLDs in this region since 1980. By comparing across a suite of observational analyses and climate model simulations (Figure 1b-h), the authors conclude that these recent MLD trends are most likely the result of internal climate variability. However, climate model projections suggest that global warming will drive strong MLD shoaling into the future. Namely, as the surface ocean continues to warm, upper ocean stratification is expected to decrease as surface water density decreases. This makes it more difficult to mix colder, deeper water into the upper layers of the ocean and ultimately thins the mixed layer. As a result of future MLD shoaling, the study finds that future marine heatwaves will be significantly more intense and occur more frequently. For example, it shows that the same wind and ocean conditions that occurred in 2019, but applied to the estimated mixed layer in 2100, results in a marine heatwave that is 6.5˚C warmer than Blob 2.0.

2Department of Atmospheric and Oceanic Sciences, University of Colorado, Boulder