The observed Atlantic major hurricane frequency has exhibited pronounced multidecadal variability since the 1940s. However, the cause of this variability is debated. Previous studies have found it to be well correlated with the low-frequency variations in the North Atlantic sea surface temperature associated with the Atlantic multidecadal variability (AMV). Additionally, changes in anthropogenic sulfate aerosol forcing have been proposed as the dominant cause of the AMV and the historical multidecadal variations in Atlantic tropical storm frequency, based on some model simulations including aerosol indirect effects. In these simulations, a decrease in anthropogenic sulfate aerosols leads to an increase in tropical storms and vice versa. On the other hand, there are large uncertainties in simulated aerosol indirect effects and substantial mean state biases in the North Atlantic. 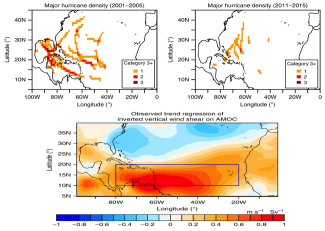