Over the past 15 years, California and neighboring regions have experienced heightened drought conditions and an increase in wildfire probability with considerable impacts on human livelihoods, agriculture, and terrestrial ecosystems. Skillful multi-year drought predictions and subsequent wildfire probability are particularly useful for water and forest resource managers as well as for cities, farmers, and hydroelectric power plant operators. To date, however, most successful forecasts of drought and wildfire conditions are limited to the seasonal products. 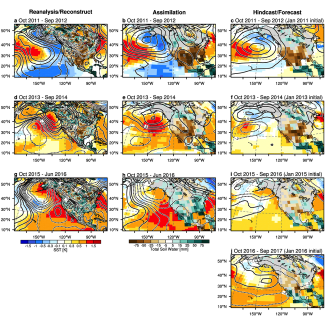 Click to enlarge
Maps showing the anomalies in sea surface temperature (color on ocean), total soil water (color on land), and sea level pressure (contour) in the period between October 2011 and September 2017. The maps in the left column represent the observed or reanalyzed data, the central column of maps depicts the simulation of ocean and external impacts combined, and the maps in the right column show the forecast given on January 1st of the preceding year. Credit: Chikamoto Y. et al. (2017)

A new study published in Scientific Reports has developed a state-of-the-art drought and wildfire prediction system based on the decadal climate prediction approach using the NCAR Community Earth System Model. This new prediction system shows the multi-year predictive skills of drought and wildfire conditions beyond the typical timescale of seasonal climate forecast models. The source of this predictability is originated from the large-scale differences of ocean temperature and atmospheric pressure anomalies between the Atlantic and Pacific oceans, as well as a discernible contribution from natural forcings and human-induced global warming. In the tropics, these Atlantic/Pacific differences modulate the global Walker circulation on decadal timescales and then affect the low-frequency variability of the high-pressure ridge off the California coast through atmospheric teleconnections. This change in the high-pressure ridge varies moisture transport from the ocean to the North American continent and then causes drought/pluvial conditions in the southwestern part of North America.

The predictive skills of drought and wildfire were tested with 10-23 and 10-45 months forecasting time. Even though it is hard to predict individual rainstorms in California and their local impacts months or seasons ahead, the model predictions still have better chance to determine whether on average the next year will have drier or wetter soil conditions as well as more or less wildfire probability. This longer predictability of soil water condition relies on the natural filtering effect of soils, which is explained by the accumulation of precipitation amount rather than the individual precipitation event.

This study demonstrates a unique application of decadal climate prediction to the drought and wildfire conditions in the southwestern US. This result is applicable to the other parts of our world, such as the Mediterranean, Australia, or parts of Asia. This study will also provide a new opportunity to mitigate the future climate risks by working with stakeholder groups that can benefit from better soil water and wildfire forecasts.

3University of Hawaii at Manoa