Can models capture the seasonality of the recent expansion of the tropics?

Moist regions near the equator and arid regions near 30˚ latitude in each hemisphere characterize Earth’s tropics. These moist and dry regions of the tropics reflect the rising and sinking branches of the Hadley circulation. In recent decades, there has been emerging evidence that the subtropical edges of the Hadley circulation have been shifting poleward in both the Northern and Southern Hemispheres, implying that the arid regions of the subtropics may be encroaching into the mid-latitudes. 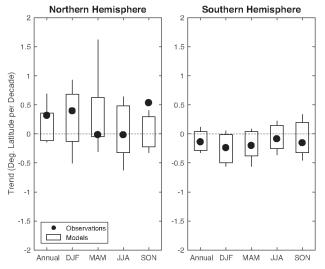 There have been conflicting conclusions in the literature about whether this observed “expansion of the tropics” could be captured in computer model simulations. Some earlier studies had suggested that the observed rates of tropical expansion exceed most model estimates, but more recent studies using updated datasets have found that the observed rates of tropical expansion are more consistent with those in models. The vast majority of these studies, however, have based their conclusions on data that have been averaged annually and over all longitudes.

In a recent article in Journal of Climate, Grise and coauthors examined seasonal and regional trends in the edges of the tropics in nine observation-based datasets for the period 1980–2008 and compared them to trends from global climate models. The observed rates of tropical expansion are largest during the summer and fall seasons in the Southern Hemisphere and the fall season in the Northern Hemisphere. The observed Southern Hemisphere summer and fall trends are well captured in model simulations of the late 20th and early 21st centuries, consistent with the roles of increasing greenhouse gases and stratospheric ozone depletion in driving poleward circulation shifts during these seasons. In contrast, the observed Northern Hemisphere fall trends are only captured in a small number of model simulations, even if the models’ ocean surface temperatures are fixed to observations. The discrepancy between the observed and modeled trends arises largely from the North Atlantic sector, where the observed poleward shift in the semi-permanent subtropical high-pressure system during fall is not well reproduced in models.

It remains unclear why most model simulations are unable to capture the large poleward shift of the Northern Hemisphere Hadley cell edge during the fall season. The observed trends may simply reflect very large natural variability in the climate system, or the models may not be properly representing the atmospheric circulation’s response to changing greenhouse gas and aerosol concentrations.

Written by
Kevin Grise, U. Virginia