Coastal warming related to ‘the Blob’

In November 2013, a marine heat wave started warming the surface water in the Gulf of Alaska. This mass of warm water, nicknamed “the Blob,” was the result of a persistent atmospheric high-pressure ridge in the Northeastern Pacific that decreased cooling and transport of surface water. In early 2014, coastal waters along the US West Coast started showing signs of warming, which persisted well into 2016. During this period, major disturbances occurred throughout the entire California Current ecosystem including mortality events of sea lions, fur seals, common murres, and Cassin’s auklets, as well as persistent toxic algae bloom that affected the clam harvest season and the crab, sardine, and anchovy fishing seasons. 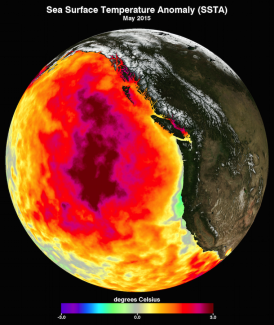 Click to enlarge
The May 2015 monthly average sea surface temperature anomaly showing 'the Blob' of record warm temperatures in the Pacific Ocean. Along the US West Coast, warm ocean temperatures were present from 2014 - 2016 and were pushed offshore for a brief period each spring during upwelling-favorable wind events.  Data shown are the JPL Multi-scale Ultra-high Resolution (MUR) version 4.1 and NASA Blue Marble. Image credit: Chelle Gentemann and JPL PO.DAAC: Charles Thompson and Jeffery R. Hall.

A recent study published in Geophysical Research Letters shows the extent and development of coastal warming during this period, based on satellite surface temperature data (MUR SST). This research shows that warm temperature anomalies appeared as early as March 2014 in the central and southern California coast, eventually extending to the entire West Coast and dissipating in August 2016.  Warming was most intense from September 2014 to October 2015, and there were two quasi-normal periods in June-July 2014 and May-June 2015.

In normal years, spring and summer winds lead to upwelling of cold, nutrient-rich waters at the coast, fueling the highly productive California Current ecosystem. While some periods of weak winds occurred in 2014, not all of them led to warm anomalies. This suggests that decreased upwelling was not the source of the warming, although it perhaps contributed to the anomalous conditions. Furthermore, during the peak of the upwelling season (May-June), central and northern California Current coastal waters returned to normal temperatures as cold water was brought to the surface. Unfortunately, the upwelling seasons were short, and warming quickly resumed in the summers of 2014 and 2015.

Warm conditions have been observed in past years during El Niño winters, causing negative consequences to the marine ecosystem. Most marine species, however, have recovered by the next normal year. The recent Blob-related coastal warming, on the other hand, has been unprecedented in magnitude, extension, and duration, and the full extent of its impacts on the California Current marine ecosystem is still under investigation.