Ocean melting of marine-terminating ice sheets poses a profound threat to the global coastal environment with approximately five meters of sea level rise locked up in the ice sheets around the West Antarctic region. Recent observations suggest significant ocean warming is already underway in this region, yet we have little understanding of the underlying processes. A new study published in Nature Climate Change tries to understand why the warming of Antarctic coastal waters is largest west of the Antarctic Peninsula and demonstrates how this warming can be caused by changes in distant Antarctic coastal winds. 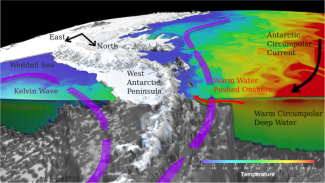 The findings reveal how a drop in sea level initiated by changing East Antarctic coastal winds is propagated around the Antarctic coastline at nearly 700 km/hr. The sea level anomaly creates an along-shelf geostrophic coastal current anomaly, which is particularly strong on the western side of the Peninsula. Due to both bottom-boundary layer friction and interior adjustment, this coastal current anomaly facilitates the movement of warmer deep water upward onto the continental shelf and toward the coast (see Figure).

The subsurface warming develops a focused intensity on the western side of the Antarctic Peninsula, 6,000 km away from the western edge of the wind perturbation. After 90 days, the Antarctic Peninsula anomaly can locally exceed 0.5°C, and within a few years can explain the observed warming trends at the base of the ice shelves in the Amundsen and Bellingshausen seas.