A recent investigation has shown that in the abyssal southeast Indian Ocean the Antarctic Bottom Water (AABW) freshening and warming have changed over the last decade. This research is based on a GO-SHIP repeat hydrography line (IO8S) that runs diagonally across the Southern Ocean’s Australian-Antarctic Basin. In 2016, GO-SHIP completed its third full repeat of this line, providing observations that suggest strongly accelerated AABW freshening since 2007. During this same period, salinity decreased at a rate four times that estimated from the earlier occupations (from 2007−1994). There has also been a simultaneous deceleration in warming. 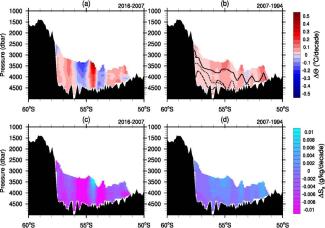 Click to enlarge
Changes in conservative temperature (upper panels; a,b) and absolute salinity (lower panels; c,d) for the periods of 2016−2007 (left panels; a,c) and 2007−1994 (right panels; b,d) in the Antarctic-Australian Basin along the I08S line. In (b) solid, dotted, and dashed lines represent the AABW core density surface for 1994, 2007 and 2016, respectively. The color contours represent the AABW mass, whose upper limit is defined as the 0°C isotherm.

As freshening only contributes significantly to sea level rise in the very coldest waters, warming is the predominant contributor to rising seas associated with AABW changes. The slowing of abyssal warming has, therefore, resulted in a deceleration in the contribution of AABW to sea level rise since 2007. Freshening and warming have contributed to an overall decrease in AABW density in this region. This research shows that the densest AABWs (observed in 1994) no longer exist, as seen by the core of the region’s abyssal water mass located as much as 600 m deeper in the water column in 2016 (illustrated by black curves in panel b).

It is conjectured that this strong AABW freshening seen in 2016 may have been due to changes associated with the 2010 calving of the Mertz Glacier Tongue along the George V/Adélie Land Coast that resulted in the ungrounding of a large iceberg. This event decreased sea ice production and reduced the salinity of the dense shelf waters thought to be the source of the Australian-Antarctic Basin bottom waters. With mean abyssal currents of about 2 cm s-1, it is plausible that this freshening could have reached the observed line six years after the event. A simple tracer age analysis also supports this supposition, but further observational and modeling investigation is required to substantiate this hypothesis and to determine how far reaching the effects may be.