Researchers investigated the response of Atlantic Meridional Overturning Circulation (AMOC) to the rise of atmospheric CO2 in the NCAR Climate System Model version 3, with the focus on the different responses under modern and glacial periods. The AMOC response to the sudden doubling of CO2 differs significantly between the modern and the glacial conditions. The AMOC is eventually reduced in the modern climate, but intensified in the glacial condition (see Figure). The response of the AMOC under both climates has a similar initial stage (~100 years) that is characterized by a rapid weakening and a similar final stage that is characterized by a slow strengthening longer than 1000 years. The initial weakening is mainly driven by the anomalous surface heat flux in the subpolar North Atlantic, as suggested by previous studies, while the final slow strengthening could be attributed to the reduction of brine rejection in the Southern Ocean and the subsequent weakening of Antarctic Bottom Water. However, at glacial climate, the AMOC experiences an intermediate stage – with a rapid intensification period of ~300 years – and a large overshoot response. This overshoot is caused predominantly by the reduction of the meltwater in the northern North Atlantic associated with the retreat of the large amount of sea ice, an effect that becomes dominant when the subpolar North Atlantic is covered by sea ice as in the glacial condition. 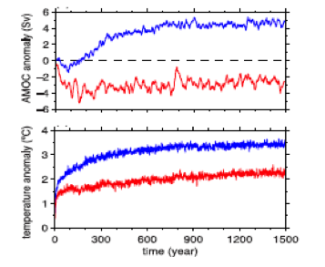 Figure: The evolution of the response (anomaly relative to initial state) of (top) AMOC transport and (bottom) global temperature to a sudden doubling of CO2 under modern (red) and glacial (blue) conditions simulated in NCAR CCSM3. In the modern climate, the AMOC decreases (by 25%, -4Sv) in the first 100 years and then recovers slowly (by 6%, +1 Sv) in the end of 1500-year simulation. For glacial climate, the AMOC also weakens (by 8%, -1 Sv) in the initial 90 years, but it then reverses to intensification with an overshoot first rapidly (by 30%, +4 Sv) in the next 300 years, and then slowly (by 13%, +1.6 Sv) in the remaining of the simulation.
Written by
Zhengyu Liu, University of Wisconsin-Madison