The El Niño Southern Oscillation (ENSO) is a warming and cooling of the tropical Pacific Ocean that happens every few years, with far-reaching impacts worldwide. The strength, pattern, and frequency of ENSO events can change over several decades. One well-known example is the change that occurred in the late 1970s, after which ENSO events became stronger and less frequent than in previous decades. Because of its magnitude and widespread impact, this change has become known as an ENSO “regime shift.” Previous research, though extensive, was inconclusive as to whether the shift happened by chance or because of changes in ENSO dynamics, including changes caused by global warming. A new study published in Geophysical Research Letters revisits this question using a sophisticated linear inverse modeling (LIM) technique and concludes that the regime shift did not occur by chance but was due to a “real” change in the ENSO system. 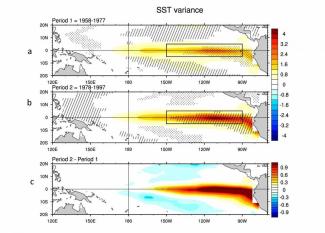 Previous attempts to understand the cause of the regime shift were unsuccessful due in part to the short duration of reliable observational data before and after the shift and consequent uncertainty in establishing the statistical significance of the change. In this study, the researchers used the LIM approach to simulate a multi-millennial time series for the 20-year periods before and after the 1970s shift. This allowed the researchers to take into account the full range of natural ENSO variations within each of these periods with high statistical confidence. The LIM technique also allowed the researchers to distinguish changes in the essential and predictable component of ENSO events from changes in the unpredictable, random component. This approach revealed a clear change in the predictable, but not the unpredictable, component of ENSO after the shift.

Although applied to the specific shift of the late 1970s, this study outlines a rigorous and objective methodology that can be used to detect whether apparent changes in ENSO during any time period are “real” or random. The ability to distinguish between real and random changes in ENSO is key to assessing the predictability of the evolving ENSO phenomenon and to detecting the influence of climate change.