Enhanced warming of the Northwest Atlantic Ocean under climate change

The Intergovernmental Panel on Climate Change (IPCC) fifth assessment of projected global and regional ocean temperature change is based on global climate models that have coarse (~100-km) ocean and atmosphere resolutions.  In the Northwest Atlantic, the ensemble of global climate models has a warm bias in sea surface temperature due to a misrepresentation of the Gulf Stream position; thus, existing climate change projections are based on unrealistic regional ocean circulation. 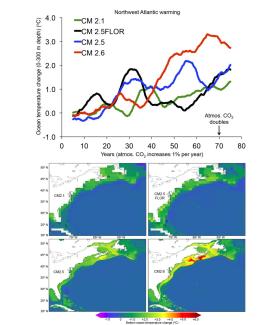 This enhanced warming is accompanied by an increase in salinity due to a change in water mass distribution that is related to a retreat of the Labrador Current and a northerly shift of the Gulf Stream. Both observations and the climate model demonstrate a robust relationship between a weakening Atlantic Meridional Overturning Circulation (AMOC) and an increase in the proportion of Warm-Temperate Slope Water entering the Northwest Atlantic Shelf. Therefore, prior climate change projections for the Northwest Atlantic may be far too conservative. These results point to the need to improve simulations of basin and regional-scale ocean circulation.

Over the past 10 years, the Gulf of Maine has warmed at a rate faster than 99% of the global ocean. The enhanced warming of the Gulf of Maine is associated with a northerly shift in the Gulf Stream, which is similar to the results reported here for GFDL’s CM2.6.  Contemporary changes in the distribution and species composition of Northwest Atlantic living marine resources are already evident, but existing projections are based on warming scenarios from coarse resolution models. Warming on the scale of 3 to 4 oC, as shown in GFDL’s high-resolution climate model, will cause more extreme effects on the ecosystem.