The coastal sea levels along the Northeast Coast of North America show significant year-to-year fluctuations in a general upward trend. Analysis of long-term tide gauge records along the North American east coast identified an extreme sea-level rise event during 2009–2010. Within this relatively brief two-year period, coastal sea levels north of New York City jumped by up to 128 mm. This magnitude of interannual sea-level rise is unprecedented in the century-long tide gauge records, with statistical methods suggesting that it was a 1-in-850 year event. 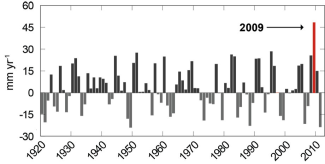 Click to enlarge
This graph shows yearly sea-level rise rates along the Northeast Coast of North America in millimeters per year. The red bar shows how extreme the rise rate was in 2009. The extreme sea level spike lasted into 2010. Credit: Paul Goddard/University of Arizona Department of Geosciences.

In a recent paper, Goddard and colleagues show that this extreme sea-level rise event was a combined effect of two physical factors. First, it was partly due to an observed 30% downturn of the Atlantic meridional overturning circulation (AMOC) during 2009-2010. This AMOC slowdown caused significant short-term changes in ocean temperatures and salinity east of North America, resulting in changes to ocean density and in turn imparting a rise in regional sea level. The extreme nature of the 2009-2010 sea-level rise event suggests that such a significant AMOC downturn is very unusual in the past century. The second contributing factor to the extreme sea-level rise event was due to a significant negative North Atlantic Oscillation index. The associated easterly or northeasterly wind anomalies acted to push ocean waters towards the Northeast Coast through a process known as "Ekman transport", resulting in further rise in coastal sea levels in addition to that imparted by the AMOC downturn.

The researchers make use of a suite of climate/Earth system models developed at NOAA’s Geophysical Fluid Dynamics Laboratory and other modeling centers to look at projections of extreme sea level along the East Coast of North American during the 20th century. These models include typical CMIP5-class models used for the 2013 IPCC climate assessment, as well as the newer climate models GFDL CM2.5 and CM2.6 with eddying oceans. In response to the increase in greenhouse gas concentrations, each of these models show a reduction in the AMOC. Given the observed connection between AMOC reduction and extreme coastal sea levels, the models thus project an increase in the magnitude and frequency of extreme sea-level rise on interannual time scales along the Northeast Coast of North America.