Observations of the poleward branches of the Hadley Cells and the edge of the tropics show a robust poleward shift since about 1980, often referred to as a widening. This has led to widespread concerns over the possible encroachment of the globe’s subtropical dry zones into currently temperate climates. In recent years, the extent to which this “desertification” trend is caused by anthropogenic forcing versus natural variability has been the subject of considerable debate. A new study, by Amaya and coauthors in Climate Dynamics, sheds light on this topic by utilizing an objective statistical technique to isolate internal and forced modes of Hadley Cell expansion in a global climate model. This allows them to quantify the different interactions of these two modes in the zonal mean and regionally varying sense, as well as improve our understanding of recent observations. 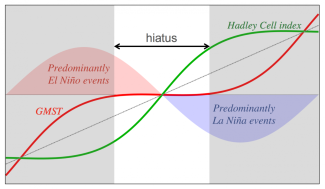 In the study, the internal mode of Hadley Cell width variations is identified using a 1000-year pre-industrial control simulation and is shown to be nearly indistinguishable from the El Niño-Southern Oscillation (ENSO). The anthropogenically forced mode, which is identified using a 20-member simulation of the historical climate, is closely related to the top of the atmosphere radiative imbalance. Together these two modes explain an average of 70% of the interannual variability seen in model Hadley Cell width indices over the historical period. When regional variations of the forced mode are considered, they show that regional changes in hydrology largely follow the zonal mean in the Southern Hemisphere but exhibit strong regional differences in the Northern Hemisphere. In particular, the forced poleward shift of the storm tracks is most significant over the North Atlantic, which highlights the importance of a regional perspective when considering Hadley Cell width variations.

The decadal shift in Hadley Cell width and its relationship with ENSO/external forcings draws interesting parallels to the recent “hiatus” in global warming. In the latter case, a prolonged period of La Niña-like conditions in the tropical Pacific largely canceled out long-term secular warming due to increased greenhouse gases, resulting in reduced global warming during the early 2000’s. This study shows a similar interaction with respect to Hadley Cell expansion but with opposite results. Decadal ENSO variations have enhanced the external forcings to generate a period of accelerated Hadley Cell expansion during the satellite era.

As the decadal ENSO cycle transitions to a warm phase, the authors expect the opposite to occur, with accelerated global warming and a “hiatus” in Hadley Cell expansion. On top of the additional contraction expected from ozone recovery, this suggests that the rapid pace of Hadley Cell expansion observed since 1980 will likely not be maintained through the first half of the 21st century.

The interplay of internal and forced modes of Hadley Cell expansion: lessons from the global warming hiatus (Climate Dynamics)