The Atlantic Multidecadal Oscillation (AMO) or Variability (AMV) is a mode of low frequency (i.e., decadal to multidecadal) climate variability centered over the North Atlantic basin. The sea surface temperature (SST) anomalies that define the AMV are characterized by a basin-scale pattern that has the same sign over the whole North Atlantic, with a maximum loading over the subpolar gyre region. Previous observational and modeling studies suggest that the AMV is associated with marked climate anomalies over many areas of the globe. These include droughts in Africa and North America, decline in Arctic sea-ice, changes in tropical cyclone activity in the Atlantic, and changes in the Northern Hemisphere atmospheric large-scale circulation. Given these numerous potential climate impacts of the AMV at decadal timescales, it is crucial toimprove the knowledge of atmospheric teleconnections and their mechanisms associated with the AMV. Improving this understanding can help advance the prediction of the AMV impacts and, hence, decadal climate predictions. 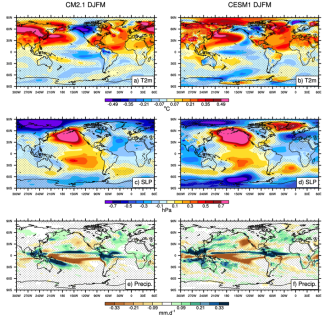 Click to enlarge
Differences between the positive and negative AMV idealized experiments for December to March (DJFM) season. (a, b) 2-meter air temperature, (c, d) sea level pressure, and (e, f) precipitation. Results from CM2.1 (GFDL) and CESM1 (NCAR) are shown on the left and right columns, respectively. Stippling indicates regions that are below the 95 % confidence level of statistical significance according to a two-sided t-test. Figure adapted from Ruprich-Robert et al. (2017). ©American Meteorological Society. Used with permission.

In a recent coordinated multi-model study between NOAA GFDL and NCAR, published in Journal of Climate, researchers performed idealized experiments using state-of-the-art global coupled models, in which the North Atlantic SSTs are restored to time-invariant anomalies corresponding to the observed AMV. These simulations allowed them to investigate the global impacts of the observed AMV and identify the respective roles of its extratropical and tropical parts. Analysis showed that the AMV warming drives a modification of the Walker Circulation that creates precipitation anomalies over the whole tropical belt. The AMV warming also leads to reduced rainfall over the western part of the US and Mexico and to a weak increase in rainfall over Europe during boreal winter (see figure). The Walker Circulation response is associated with broad Pacific anomalies that project onto the Interdecadal Pacific Oscillation (IPO) in its negative phase. The researchers found that the IPO response is mainly driven by the tropical part of the AMV.

These results stress the importance played by the North Atlantic Ocean variability associated with the AMV in driving changes at a global scale, especially in the Pacific at decadal timescales. It also suggests that the AMV has served an important role in the global climate variability observed during the last century. Given the multi-year predictability associated with the AMV, this study is encouraging for the prospect of getting skillful decadal predictions over regions outside of the North Atlantic through the impacts of the AMV.