As the planet warms, regional imbalances in precipitation (P) and evaporation (E) are expected to become larger. This will drive an overall intensification of the water cycle, resulting in more stormy weather. However, it is difficult to know how quickly the water cycle will respond to climate change without fully understanding how sensitively it has responded in the past. Now research suggests the isotope ratios of hydrogen and oxygen in water—which are preserved in ice cores and other records of past climate—can provide important clues about such water cycle changes. 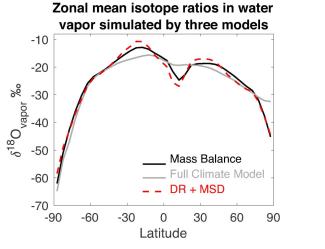 Click to enlarge
A simple linear model accounting for changes in drying ratio (DR) and mean source distance (MSD) accurately simulates the expected pole-to-pole variations of isotope ratios in water vapor. Results from the linear statistical model (red, dashed line) for the June, July, August season are shown compared to two reference simulations: one from a state-of-the-art climate model (gray line) and one from a zonal model based on principles of water mass balance (black line). The strong comparison indicates that records of water isotope ratios can be used to characterize key changes in the water cycle—principally, how the efficiency with which precipitation dries the atmosphere and the efficiency of moisture transport are changing with climate.

Using principles of mass balance, a new study in Geophysical Research Letters shows that spatial patterns of P and E determine pole-to-pole variations in isotope ratios of water vapor and precipitation. Patterns of P and E shape the atmosphere’s isotopic composition by changing two critical factors: the efficiency with which precipitation dries the atmosphere (the drying ratio) and the probability that moisture, once evaporated from the ocean surface, is transported downwind.

When transport increases, moisture effectively travels longer distances before raining out. As a result, moisture observed at any one location is likely to have been sourced from farther away. The new study shows that a simple linear model that accounts for changes in mean source distance, as well as the local drying ratio, can successfully replicate water isotopic variations in space and time.

Despite these generalities, isotope ratios nearly everywhere are shaped by some combination of local and remote water cycle drivers. This makes for a tricky interpretation of hydroclimate variability if isotopic observations are only available from a single location. However, the study is quick to point out that scientists can successfully untangle isotopic variations due to local and remote changes in P and E by using a spatially broad network of measurements—for example, one that spans multiple latitude bands.