Atmospheric greenhouse gases have continued their steady increase in the new century. Logically, one would expect that global mean surface temperature (GMST) would also continue to increase in the same fashion as experienced in the latter decades of the 20th century. However, between 1998 and 2013 GMST actually plateaued with much smaller increases than the average over the last 60 years and labeled the “global warming hiatus.” The fact that this slowdown in GMST increase was not predicted by most climate models has led some to question the steady increase in heat predicted under increased greenhouse gas conditions. 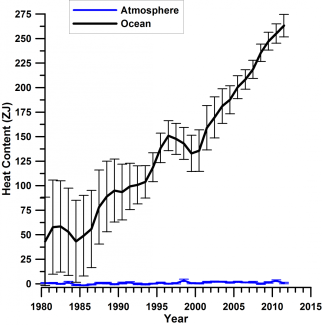 A new paper in Earth’s Future documents the work of many researchers showing that GMST, while an important climate indicator, is a measure of the Earth’s surface warming, not a measure of total accumulated heat energy in the Earth’s system. The paper notes that the amount of missing heat that could cause the slowdown in GMST increase would be but a small fraction of the total heat entering the ocean. So the slowdown in GMST increase is most likely a redistribution of excess heat into and within the ocean. Thus, the overall Earth continued to warm with the ocean absorbing the large majority of excess heat. Present and future research activities are interested in where and under what conditions the ocean experienced increased heat uptake. An important component in achieving this is support of the subsurface ocean observing system – mainly by Argo profiling floats, both in its present form and with more complete global coverage – and subsurface remote sensing. Improvements in modeling ocean heat uptake are possible and already underway.