How predictable is the timing of a summer ice-free Arctic?

The strong decline in the summer sea ice cover of the Arctic over the last decades has led many to ask when the Arctic will be ice-free for the first time. Rather than providing yet another answer to this question, in a recent Geophysical Research Letters article by Jahn et al., they focused on determining how well the occurrence of an ice-free Arctic can be predicted, due to the inherent internal climate variability of the system. 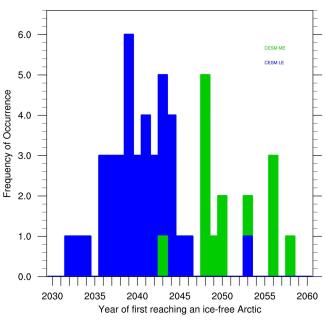 By using the newly available large ensemble of 40 simulations from the Community Earth System Model (CESM1), which all have slightly different initial conditions but are forced the same, they were able to assess the influence of natural fluctuations of the climate system on Arctic sea ice predictability. They found that the uncertainty for the prediction of an ice-free Arctic caused by this internal climate variability amounts to around two decades. The study further showed that present-day or past sea ice conditions could not be used to narrow down the prediction uncertainty from internal variability.

This means that even the best climate models cannot narrow down the exact year or even the exact decade when researchers expect to see an ice-free Arctic for the first time, as the timing depends on the exact trajectory of the weather and climate variability between now and then, which can’t be predicted.

How predictable is the timing of a summer ice-free Arctic? (Geophysical Research Letters)