La Niña, a recurrent cooling pattern over the tropical Pacific Ocean, has been linked to reduced wintertime precipitation across the southern tier of the United States. Historical observations show that La Niña events can last two years or longer, a feature that could make their associated drought impacts more persistent. Two new studies published in Geophysical Research Letters show how these multi-year La Niña events affect North American climate and whether they can be predicted years in advance. 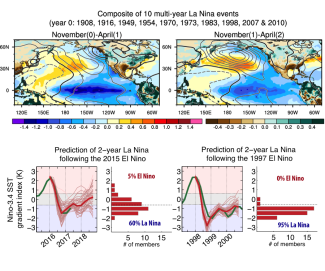 Click to enlarge
(Top) Observed ocean-atmosphere anomaly patterns during the first and second winters of a composite multi-year La Niña event. Sea surface temperature (shading over the ocean, °C), terrestrial precipitation (shading over land, mm day-1), and sea level pressure (contours at intervals of 0.5 hPa) anomalies are composited for November-April of 10 multi-year La Niña events during 1901-2012. (Bottom) Prediction plumes of La Niña events following the El Niño events in 2015 and 1997 and probability distributions of the return of La Niña in the second winter. The model is initialized with observed oceanic conditions in November 2015 and 1997. The ensemble-mean evolution (red curves) is compared with observations (green curves). Click to enlarge

Despite their outsized impacts on drought, little is known about the predictability of these multi-year La Niña events. The second study addresses this issue by using a suite of decadal prediction experiments performed with a climate model capable of simulating multi-year La Niña events. The model showed remarkable skill in predicting the occurrence of multi-year La Niña events that were preceded by strong and moderate El Niño. This study showed that the predictability of La Niña duration is controlled by the magnitude of initial oceanic heat content anomalies driven by the preceding El Nino. These results permitted the prediction of the duration of the ongoing La Niña event. The forecasts, initialized in November 2015 at the peak of the record-breaking 2015-16 El Niño event, provide a 60-80% probability of returning La Niña for the upcoming 2017-18 winter.

These new findings can potentially improve the ability to predict both the strength and duration of US droughts caused by La Niña.

Written by
Yuko M. Okumura and Pedro DiNezio, University of Texas at Austin Institute for Geophysics

1University of Texas at Austin