The influence of Arctic amplification on mid-latitude summer circulation

Stalling summer weather in the mid-latitudes, either prolonged hot-dry periods or many days of heavy rainfall, can lead to severe drought and flooding events, respectively. Many recent summers, including 2018, were characterized by such stalling weather systems, which had an enormous impact on society. Under climate change, hot-dry extremes present a particularly serious risk for society. Simple warming of mean summer temperatures is already leading to a dramatic increase in the intensity of heat waves, and on top of that, changes in atmospheric circulation might prolong the duration of such heat waves. The uncertainties in such dynamical changes, however, are large. Arctic amplification – the accelerated warming in the Arctic as compared to lower latitudes – might affect mid-latitude weather, but most research efforts to-date have analyzed links thought to be important in winter. This new study presents the first comprehensive review of research on summer weather stalling, focusing on the influence of Arctic amplification and how it could interact with other factors influenced by climate change. 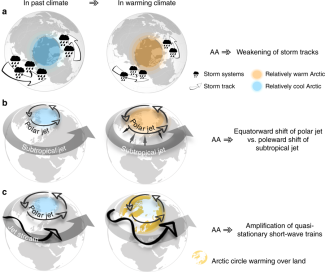 Click to enlarge
Schematic representation of proposed dynamical mechanisms in summer. A) A weakening of storm tracks, b) latitudinal-shift in jet positions, and c) amplification of quasi-stationary waves.

The authors review the scientific evidence behind three leading hypotheses on the influence of Arctic changes on mid-latitude summer weather: (1) weakened storm tracks, (2) shifted latitudinal position of jet streams, and (3) amplified quasi-stationary waves. They show that there is strong evidence, from observations and climate models and backed by a solid physical understanding, that summer storm tracks are weakening. Summer weather is, therefore, likely to become more “continental” with higher risks of prolonged hot-dry extremes. Such changes are also observed over the last decades and more pronounced than those seen in climate models. This indicates that either the simulations are too conservative, or the observed changes are strongly influenced by natural variability. For the other two hypotheses (shifted jets and amplified waves), the evidence is still inconclusive with respect to the exact role of Arctic amplification. Still, the authors identify a number of possible interactions between Arctic-driven circulation changes and other remote and regional feedback processes that could lead to more persistent hot-dry extremes in the mid-latitudes. The exact nature of these nonlinear interactions is not well quantified, but they provide potential high-impact risks for society.