The unprecedented loss of sea ice and associated amplified warming of the Arctic in recent years has spurred a flurry of research on how these changes at high-latitudes may impact the jet streams and, thus, weather at lower latitudes. While there is ample model evidence that future Arctic warming and sea ice loss will modulate the changes to the jet stream by 2100 under climate change, there is much disagreement on whether we have already witnessed substantial impacts. One possible reason for the disagreement is the issue of causality. Most observational studies employ some form of correlation analysis in an attempt to quantify the response of the mid-latitude circulation to variations in sea ice loss and Arctic temperatures. However, as the saying goes, ‘‘correlation does not equal causation,’’ and thus there is concern that any links identified are instead a reflection of the atmosphere partially driving Arctic temperatures and ice loss, rather than the other way around. 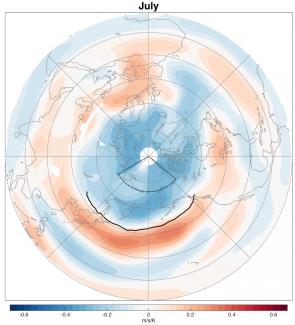 Click to enlarge
The sensitivity of the zonal winds (in m/s/K) at each grid point to weekly Arctic temperature swings in the North Pacific sector of the Arctic. The black line denotes the climatological jet stream position over the North Pacific, and the dashed lines denote the regions used to define the Arctic temperature anomalies. All values are calculated as a CMIP5 multi-model median. (copyright American Meteorological Society, Barnes and Simpson 2017).

While this work demonstrates an influence of Arctic temperature swings on the behavior of the jet streams on ~weekly timescales, it does so using only global climate model output. A critical next step for this work is to perform a similar analysis using the observations and to compare the results with those from the models. Such work is currently in progress by Barnes’ research team.

Elizabeth A. Barnes1 and Isla Simpson2