The many different flavors of radiative feedbacks

Recent and ongoing research shows that atmospheric radiative feedbacks depend on changes in sea-surface temperature patterns (“pattern effect”) and global mean temperature (“feedback temperature dependence”). This implies that feedbacks can change as warming patterns and global temperature evolve over time, counter to what has been assumed for decades. This realization has led to a proliferation of feedback definitions and methods to estimate equilibrium climate sensitivity (ECS).

In a recent paper published in Geophysical Research Letters, Rugenstein and Armour contrast the equilibrium, effective, and differential feedback parameter definitions and discuss their physical interpretations and applications (Table 1). For example, the differential feedback parameter is most useful to study the pattern effect but does not actually satisfy the standard model of global energy balance. As another example, the equilibrium climate feedback is most suitable to study feedback temperature dependence, but cannot be combined with observed forcing estimates to deduce ECS from the historical record. 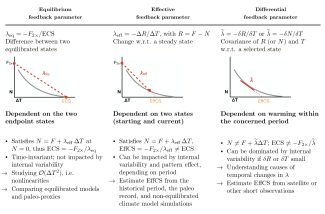 Table 1: Section of Table 1 of Rugenstein and Armour 2021 describing three possibilities of defining radiative feedbacks and their applications. If radiative feedbacks were not dependent on changing surface warming patterns, the three definitions would be indifferentiable.

Importantly, these feedback definitions imply different values of effective or equilibrium climate sensitivity. The authors show with ten equilibrated coupled climate models for which the true ECS are known, that the most common and recently proposed methods of estimating ECS can lead to estimates that differ by several degrees and substantially underestimate the true ECS. Rugenstein and Armour suggest using the differential feedback parameter to estimate ECS with minimum information, namely regression the top of the atmosphere radiative imbalance against the surface temperature increase of annual means of year 100-400 of a step-forcing simulation of quadrupled CO2. Results imply that if the CMIP protocol was changed to request 400 year instead of 150 year long simulations, model ECS could be estimated within 5% error.

The most pressing open questions are a) how to physically relate feedback estimates which use different feedback definitions or different states of surface warming patterns, b) how to re-phrase global energy balance frameworks to include the pattern effect, and c) how to define non-Charney feedbacks present in Earth System Models and the real world to be comparable to the radiative feedback definitions the authors layed out here.

Lastly, the authors argue that a community-wide agreement on the interpretation of the feedback definitions would advance the quest to narrow the estimate of climate sensitivity and understand how feedbacks change through time.

Maria A. A. Rugenstein1 and Kyle C. Armour2