In 1974, images acquired from NOAA satellites revealed a puzzling phenomenon: a 250,000 square kilometer opening in the winter sea ice in the Weddell Sea, south of South America. The opening, known as a polynya, persisted over three winters. Such expansive ice-free areas in the ocean surrounding Antarctica have not been seen since, though a small polynya was seen in 2016 and a more significant one – the largest since 1974 – has just opened up over the past month. How frequent are these polynyas, how long do they last, and what are their climatic roles? 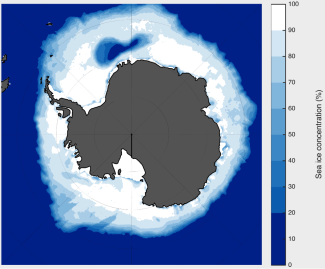 Click to enlarge
A polynya, or opening in the sea ice, occurred in the Southern Ocean's Weddell sea during the winters of 1974-76, triggering a series of climatic and oceanographic changes. A winter polynya opened up at the same location in the past 2 months, the largest since the 1970s. This image shows the sea ice concentration averaged over three September months 1974-1976 during the Weddell polynya. Data come from the NIMBUS-V satellite from the National Snow Ice Data Center. Click image to enlarge.

A new modeling study highlights the global effects of these anomalous polynyas. Southern Ocean polynyas indicate intense local convection of relatively warm circumpolar deep waters to the ocean surface, resulting in melting of the sea ice. In a long control simulation from a coupled ocean-atmosphere model, researchers observed a natural, highly regular, multidecadal (70-80 year) oscillation between periods of Southern Ocean open-sea convection (and hence large polynyas) and non-convective periods. When they occur, the researchers observed, polynyas act as a release valve for the ocean’s heat. Not only does the immediate area warm but there are also increases in overall sea surface and atmospheric temperatures of the entire Southern Hemisphere and, to a lesser extent, the Northern Hemisphere.

The pattern of warming results in changes in the meridional gradients of sea surface and atmospheric temperatures, which drive large-scale atmospheric pressure changes that weaken the mid-latitude westerly winds, the strength of the atmospheric Hadley circulation, and the tropical trade winds in the Southern Hemisphere.

Heat escaping from the ocean through polynyas impacts the large-scale energy budget of the ocean and atmosphere, cloud patterns, and even rainfall in the Intertropical Convergence Zone (ITCZ) – the equatorial belt where trade winds converge, resulting in the most intense precipitation on the planet. During convective (polynya) periods, the increase in incoming top-of-the-atmosphere radiation in the Southern Hemisphere is balanced by an increase in the Northern Hemisphere outgoing radiation. The energy supplying this increase is carried by enhanced atmospheric transport across the equator, as the ITCZ and associated wind patterns shift southward, toward the anomalously warmer Southern Hemisphere.

Southern Ocean convection (and resulting polynyas) are part of a natural pattern of climate variability. It is unclear yet – and a challenge for future researchers – how this pattern will change with future climate change. The strength and global scale of the atmospheric teleconnections observed in this study suggest an important role for Southern Ocean convection in global climate dynamics on interannual to multidecadal timescales.