The US Southwest experiences a Mediterranean climate, featuring low annual precipitation with an outstanding seasonal cycle of mild, wet winters and hot, dry summers. Changes in winter precipitation have profound implications for water resources and crop production in this region which is already under severe water stress. Climate models generally project wetter winters for the US Southwest under global warming. However, large uncertainties in model projections make it difficult to create infrastructure and resource management plans. Understanding how model biases affect future projections can help enhance the use of climate projections to support long-term decision-making. 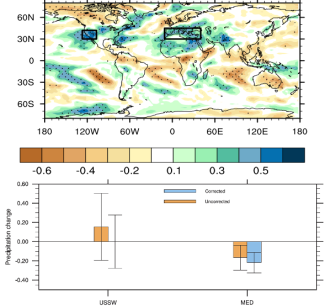 In a study recently published in Geophysical Research Letters, Dong et al. discovered a strong relationship between a common model bias with future precipitation changes over the US Southwest (Figure 1). The model bias features a double Intertropical Convergence Zone (ITCZ), which is a common and long-lived bias in many models, including most of the models used here. More specifically, models with excessive double-ITCZ biases tend to exaggerate the future precipitation increase over the US Southwest.

Models with larger double-ITCZ tend to produce enhanced precipitation changes over the tropical Pacific as a combination of thermodynamic and dynamic response. This enhanced tropical heating strengthens the subtropical Pacific jet and deepens the Aleutian low, leading to a wetter winter over the US Southwest under warming conditions. Additionally, models with larger double-ITCZ are also related with weaker mean-state Atlantic Meridional Overturning Circulation (AMOC). Evidently, models with weaker present-day AMOC tend to project a relatively muted slowdown of the AMOC under warming in the future. This is related to stronger surface warming in the northern North Atlantic, weaker subpolar jet stream, and lower subtropical surface pressure, which lead to a wetter Mediterranean Basin. Therefore, models with excessive double-ITCZ biases also tend to understate the precipitation decrease over Mediterranean Basin in the future.

Overall, this study first revealed the mechanistic and statistically significant connections between the double-ITCZ bias and future model projections in precipitation over the US Southwest and Mediterranean Basin. Potentially, we can use the observed double-ITCZ to constrain the projected future precipitation changes based on this relationship. Constraining a model by the observed double-ITCZ index lowers the projected winter precipitation increase to no change over the US Southwest and intensifies the projected precipitation decrease by 32% relative to the uncorrected change over the Mediterranean Basin under global warming (Figure 1). The relative reduction in future winter precipitation projected after the bias correction indicates reduced spring runoff and increased spring temperatures, both of which increase the likelihood of future water stress and wildfires in the studied regions.