Over the past few decades, a growing body of evidence suggests that ocean mesoscale and frontal-scale features in the Gulf Stream and Kuroshio Extension regions are influencing the atmosphere. Studies on the atmospheric response over these regions typically fall into one of two categories – the oceanic influence on the atmospheric mean state or on synoptic-scale weather systems. An outstanding issue, however, has been the lack of mechanistic understanding concerning how these two research avenues coalesce. A prominent example concerns the bands of wintertime mean near-surface wind convergence that are observed to meander along the strong sea surface temperature gradients of the Gulf Stream and Kuroshio Extension. Many potential mechanisms have been put forward to explain this phenomenon in which synoptic transient contributions are often implicitly assumed to cancel out. However, recent studies have shown that this mean pattern is actually heavily skewed by the continuous passing of these weather systems. These systems have vastly different near-surface wind convergence patterns and magnitudes to those from the wintertime mean, making it difficult to understand from where the meandering oceanic imprint originates. 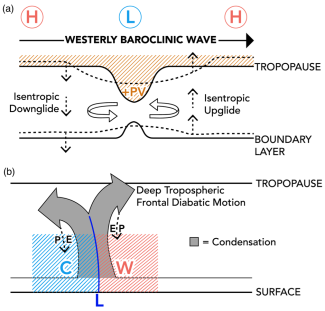 Click to enlarge
Schematic representation of the (a) atmospheric “non-frontal” and (b) atmospheric “frontal” components embedded within a continuous series of synoptic-scale weather systems. (a) The non-frontal situation is shown to be strongly reminiscent of the isentropic upglide and downglide induced by a positive potential vorticity anomaly superimposed on a westerly baroclinic flow, in which a large degree of cancellation is expected. (b) The shaded arrow represents deep tropospheric diabatic motion taking place at an atmospheric cold front (cold and warm air in blue and red, respectively) around a low pressure center (L). Precipitation (P) falls from the induced cloud-system and there is some evaporation (E) outside of it. This contribution offers much less cancellation.

In a recent study in Geophysical Research Letters, Parfitt and Seo introduce a new framework to resolve this apparent disagreement. In their study, the wintertime mean near-surface wind convergence is partitioned into two constructs related to synoptic-scale weather systems: one when atmospheric fronts are present and one when they are not. By considering the weighted cumulative contribution of both scenarios to the mean, the authors illustrate that the meandering ocean imprint in the wintertime mean near-surface wind convergence can actually be explained as the direct accumulation of processes acting on the synoptic time-scale, yielding maximum wind convergence over the warmer side of the Gulf Stream and Kuroshio Extension fronts through local strengthening of atmospheric fronts. The non-frontal motion, in contrast, displays significant cancellation, leading to divergence that is an order of magnitude smaller. This separation implies that the key to recognizing the influence of the Gulf Stream and Kuroshio Extension on the seasonal mean and longer-term climate is through a proper understanding of how the ocean influences atmospheric fronts. Existing theories on frontal scale air-sea interaction suggest climate models are only now beginning to resolve these processes. As such, this study strongly hints that a more influential role for the mid-latitude ocean on climate is yet to be revealed, one that can be better understood within this new framework.

New Framework for Near-Surface Wind Convergence over the Kuroshio Extension and Gulf Stream in Wintertime: The Role of Atmospheric Fronts (Geophys. Res. Lett.)