Densely populated regions located at the mid-latitude Northern Hemisphere have been hit by extreme winter weather in recent years. One of the latest events, the Texas extreme cold in February 2021 caused widespread power outage and significant socioeconomic damages. Important air-sea-snow-ice processes have been identified and investigated to study extreme cold weather in a warming climate. One of these processes, the Atlantic Meridional Overturning Circulation (AMOC) can influence both weather and climate at mid-latitudes due to its transport of a large amount of heat northward in the ocean. In Yin and Zhao (2021), the authors use a state-of-the-art global weather/climate modeling system with high resolution (GFDL CM4C192) to better understand the role of AMOC in the US extreme cold weather.

The authors compare extreme winter weather in two climate states: with and without a vigorous AMOC. To obtain a climate state without an AMOC, the water-hosing experiment is performed by imposing a 0.6 Sv freshwater addition in the northern North Atlantic. The AMOC shuts down in about 20 years and the atmosphere in the Northern Hemisphere approaches a new quasi-equilibrium state thereafter.

In the control simulation of CM4C192 with a vigorous AMOC, the US east of the Rocky Mountains is a region characterized by intense north-south heat exchange in the atmosphere during winter. Without the northward heat transport by the AMOC in the hosing experiment, this channel of atmospheric heat exchange becomes even more active through the Bjerknes compensation mechanism (Figure 1). Across the US, extreme cold weather intensifies disproportionately compared with the mean climate response after the shutdown of AMOC. This amplified response at the tail of the daily temperature distribution could be several times larger than that of the mean. 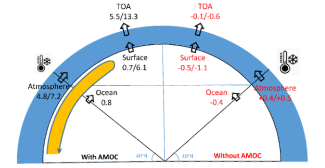 Figure 1. Schematic showing the energy balance for the entire atmosphere north of 40°N in the climates with and without a vigorous AMOC. The left half with black numbers (annual/DJF) shows heat fluxes (PW) at the top, bottom and southern boundaries in the long-term control run of CM4C192. The right half with red numbers shows the heat flux anomalies during years 21–100 of the hosing experiment relative to the control. The positive and negative values indicate enhanced and reduced heat fluxes, respectively. Only the annual mean value is shown for the oceanic transport. The blue and yellow shadings denote the atmosphere and AMOC, respectively.

The results suggest that the AMOC can modulate daily temperature extremes more efficiently. As caveats, the paper represents a sensitivity study with idealized experimental design. Some other important factors such as the greenhouse-gas-induced warming in extremely cold daily temperatures have not been taken into account yet. The next step will be to consider all these factors in model simulations and investigate their combined effects on extreme winter weather.