Ocean salinity is a predictor of terrestrial precipitation

There is a very large water cycle over the ocean, with 90% of the evaporating moisture raining back down on the ocean itself. The remaining 10% of the water that is transportedon to land sustains terrestrial life and human society. This ocean-to-land moisture transport leaves an imprint on sea surface salinity, making this “nature’s rain gauge” to measure the variations of the water cycle. 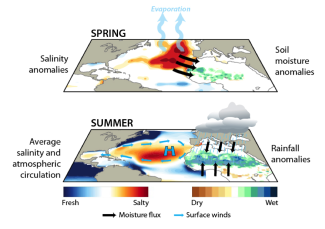 Click to enlarge
Schematic figure illustrating the salinity-Sahel precipitation mechanism. Top: Winds evaporate water from the subtropical North Atlantic ocean, leaving behind high levels of salinity during the spring. The exported moisture makes its way to the African Sahel, where it soaks the arid land and gradually builds up soil moisture over the course of three months. Bottom: The soil moisture couples with convection in the atmosphere to create a feedback loop that draws in additional moisture from the North Atlantic and Mediterranean. This increases precipitation during the summer African monsoon season. (Illustration by Jack Cook, Woods Hole Oceanographic Institution)

The close linkage between the oceanic and terrestrial water cycles motivated Li et al. to explore whether salinity signatures can be utilized as a predictor of terrestrial precipitation. Variations in winter and spring surface salinity within the salinity maximum of the North Atlantic (the focus of the SPURS-1 field campaign) were found to correlate well with summer rainfall in the Sahel region of Africa. Two new studies provide strong evidence that salinity in the subtropical North Atlantic is a skillful predictor for precipitation in the African Sahel and the US Midwest. Specifically, using observed salinity and precipitation, as well as atmospheric moisture budget analyses, Li and colleagues found that springtime salinity in the northeastern (northwestern) portion of the subtropical North Atlantic is significantly correlated with summer precipitation in the African Sahel (US Midwest). Such a relationship between pre-season salinity and terrestrial precipitation is established through ocean-to-land moisture transport and a positive coupling between soil moisture and precipitation that bridges the three-month delay (see figure). Due to the physical linkage between salinity and terrestrial precipitation, seasonal rainfall forecasts in these two regions are significantly improved by incorporating salinity into prediction models. These results call for sustained monitoring of ocean salinity, which provides an important tool for improving the existing climate prediction systems based on sea surface temperature-precipitation relationships.

Implications of North Atlantic sea surface salinity for summer precipitation over the US Midwest: Mechanisms and predictive value (J. Climate)