Atmospheric rivers are long, narrow regions of greatly enhanced moisture transport in the atmosphere, commonly associated with extratropical storms. They are known to produce extreme precipitation over many locations around the globe, including the West Coast of the United States, western Europe, Chile, and even Antarctica. They are in fact associated with the majority of flood events for California, Oregon, and Washington, and are so vital for water resources in California that a lack of atmospheric rivers can even push the region into drought. Beyond their impacts on precipitation, it is estimated that the majority (85-90%) of the poleward moisture transport that occurs in the mid-latitudes is done via atmospheric rivers, which means they play a major role in the global transport of water and energy. 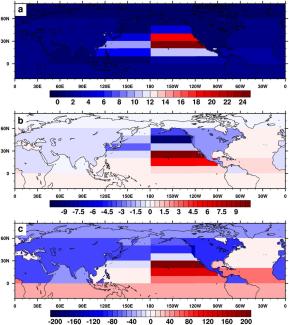 Click to enlarge
The majority of moisture during an atmospheric river (AR) event comes from the Northeast Pacific Ocean, but other regions also contribute. a) Map of the average fraction of moisture (in percent) for all 99th percentile AR events that impact the West Coast region in Dec-Jan-Feb in the modern era, along with b) difference in moisture fraction between AR events and the DJF climatological average, and that c) difference normalized against the 12-hourly standard deviation of moisture fraction in DJF.