Paleoceanographers have uncovered widespread evidence for significant and abrupt changes in the Atlantic meridional overturning circulation (AMOC) system on millennial timescales. However, proxy records chronicling changes in ocean circulation over timescales of decades to centuries are rare, due to geochemical limitations and standard sedimentation rates. Whereas some studies have posited weakened Gulf Stream transport during the Little Ice Age (LIA; 1450–1850 C.E.) period, others have inferred no substantial changes to AMOC during the LIA (and last millennium) but suggest a more recent slowdown (since 1970). Writing in Nature Communications, Thirumalai and coauthors report new insights into this debate, where high-resolution reconstructions alongside model-data comparisons reveal essential constraints on the state of Atlantic surface ocean circulation during the LIA. 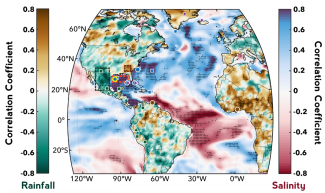 To examine high-resolution fluctuations of Atlantic Ocean circulation, Thirumalai et al. reconstructed surface ocean temperature and salinity using foraminiferal geochemistry in the Gulf of Mexico. They show that their site not only provides large-enough sedimentation rates to allow for centennial-scale investigations but also that climate at their site is correlated with Atlantic-wide circulation as well as with continental rainfall over decadal timescales. Using a transient simulation of last millennium climate and focusing on centennial-scale correlations, the authors found similar patterns between the observed (over decades) and simulated (over centuries) correlations.

Synthesizing several multiproxy records, Thirumalai and colleagues found that the North Atlantic experienced unusually fresher conditions during the LIA. Interpretation of this signal as a weakening of surface ocean circulation during the LIA is consistent with the observed and simulated correlations. Remarkably, synthesis of reconstructed rainfall anomalies also match these correlations and suggest coordinated ocean-atmosphere linkages at play during the LIA.

Further analysis of the climate model output places these results in the context of the AMOC. The model simulates changes during the LIA in agreement with the proxies, where weakened Atlantic surface ocean circulation coincides with widespread rainfall anomalies. However, the model also indicates no changes in the AMOC over the LIA and instead points to shifts in the sub-polar gyre as the driving force behind these sustained circulation changes. Thus, this study potentially reconciles previous conflicting results and shows that weakened surface ocean circulation during the LIA can be consistent with little-to-no changes in the AMOC. The researchers conclude that centennial links between surface ocean circulation and hydroclimate sustained LIA climate change regardless of what triggered its onset.

1University of Texas at Austin