The Quasi-Biennial Oscillation modulates teleconnections of the Madden-Julian Oscillation

The Madden-Julian Oscillation (MJO) influences weather across the globe. The MJO is oftentimes defined by a tropical cloud anomaly that originates within the western tropical Pacific and propagates towards the central tropical Pacific over a timespan of a few weeks to months (i.e. on sub-seasonal timescales). As its cloud disturbance moves eastward, the MJO can excite extratropical Rossby waves that then propagate across the mid-latitudes, the resulting influences of which are called teleconnections. Recent research suggests that the Quasi-Biennial Oscillation (QBO), an oscillatory pattern between westerly and easterly winds in the lower stratosphere, modulates the tropical character of the MJO and its teleconnections. The research by Toms et al. therefore estimates how much impact the QBO has on the global teleconnection signature of the MJO. 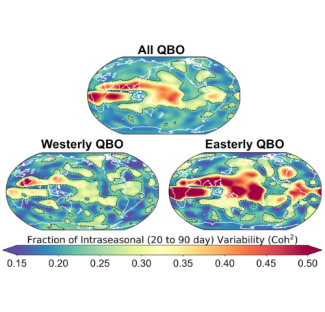 In their study, the authors use a spectral decomposition approach to quantify the relationships between the MJO and upper-tropospheric geopotential separately for each season of the year and for westerly and easterly QBO phases. Cross-spectral decomposition assesses how often the amplitude and phase of two time-series are related in a similar way, which ensures that the analysis considers any time lags between variability in the MJO and upper-tropospheric geopotential.

Similar to previous studies, the results suggest that the MJO is related to upper-tropospheric geopotential anomalies across the globe. The novel contribution of the results lies in the analysis of the impacts of the QBO, which suggests that the QBO does impact the global teleconnection signature of the MJO. The modulation is mainly observed through changes in the locations of the MJO teleconnections between westerly and easterly QBO phases. The authors’ analyses were completed using reanalysis data from 1980 through 2016, which includes approximately a dozen samples for each QBO phase and season.

Interestingly, these impacts occur to a much lesser extent within a state-of-the-art earth system model, CESM2-WACCM. The model does produce a reasonably realistic MJO and QBO, although they are not identical to those within reanalysis. Further research is needed to understand why these differences exist between the model and observations. This could be related to a combination of differences in the simulated and observed MJO and QBO and the propagation mechanisms of the MJO teleconnections into mid-latitudes.

Overall, this study affirms the importance of the MJO in sub-seasonal global weather patterns, and suggests that the QBO phase should be considered for any assessments of MJO teleconnections.