The South Atlantic is unique in that it is the only major ocean basin where heat is transported from the pole towards the equator. In this basin, significant inter-ocean exchange of heat and salinity from the Indian and Pacific Oceans serve as the main balance for the global meridional overturning circulation (MOC). Recently, the research community started investigating and assessing the role of the South Atlantic component of the MOC (SAMOC) on climate and extreme weather. For example, it has been shown that the SAMOC could influence global monsoon rainfall through the forcing of an interhemispheric atmospheric circulation. Although there exist observational estimates of the SAMOC, the decadal and multi-decadal variability of the SAMOC and its influence on climate and weather cannot be assessed due to its short temporal record. 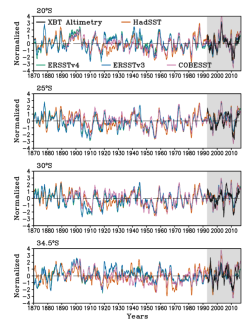 Click to enlarge
SAMOC time series at four latitudes in the South Atlantic obtained from observed (black) and those reconstructed from four different SST products and SAMOC joint variability (color). All time series were normalized by their standard deviation. The trained period (1993-present) is highlighted by a grey box. The reconstructions are very similar among SST products with respect to the observed SAMOC with correlations exceeding 0.9 for the 20°S, 25°S, and 30°S and 0.7 for the 34.5°S.

This study reconstructs a century-long SAMOC index, from 1870 to present, using sea surface temperature (SST) from 1993 to present, the period for which Expendable Bathythermographs (XBT) and satellite altimetry observations of SAMOC are available. The reconstructed index is highly correlated to the observational-based SAMOC time series and provides a long historical estimate. Results show that the Interdecadal Pacific Oscillation (IPO) is the leading mode of SAMOC-SST covariability, explaining approximately 85%, with the Atlantic Niño accounting for less than 10% of the variability. The reconstruction shows that SAMOC has recently shifted to an anomalous positive period, consistent with a recent positive shift of the IPO.

Observations, particularly for the SAMOC, are limited. Therefore, this proposed reconstruction could alleviate some of the problems generated by the paucity of data, and stimulate new and enhanced observational programs. The reconstruction could also help understand SAMOC variability from interannual to decadal timescales and its impacts on atmospheric circulation, climate, and extreme weather from an observational perspective. It will also provide an assessment of the current state of the SAMOC, which shows a recent shifted to an anomalous positive period.